Facebook is too powerful, morally bankrupt and in need of government oversight, ‘whistleblower’ Haugen tells Senate 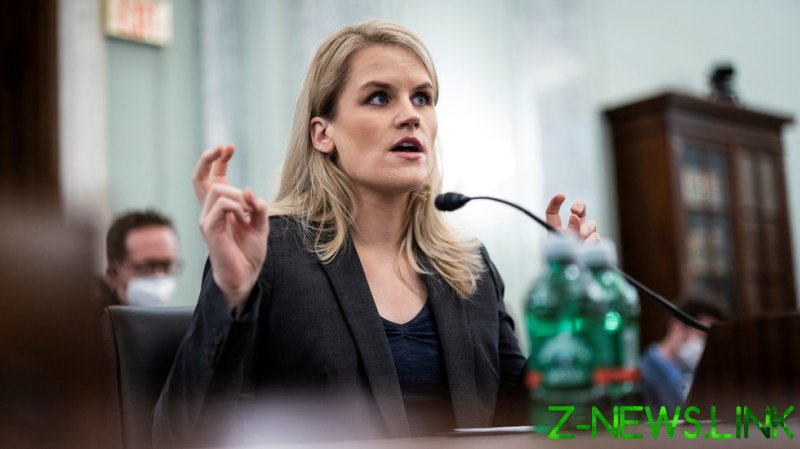 Fresh off the ‘60 Minutes’ interview on Sunday and sporting a Twitter verification in record time, Haugen testified on Tuesday before a Senate subcommittee chaired by Richard Blumenthal (D-Connecticut).

Haugen accused Facebook of putting “profit over safety” and compared it to tobacco companies, arguing that “a company with such frightening influence over so many people – over their deepest thoughts, feelings and behavior – needs real oversight.”

She also said that “left alone, Facebook will continue to make choices that go against the common good – our common good.”

The pretext for the hearing were materials Haugen leaked to The Wall Street Journal over the weekend, outlining Facebook’s own studies that suggest Instagram and social media in general have a negative psychological effect on young girls.

Commenting on Monday’s technical problem that took Facebook – as well as Instagram and WhatsApp, which it owns – offline, Haugen quipped that “for more than five hours, Facebook wasn’t used to deepen divides, destabilize democracies, and make young girls and women feel bad about their bodies.”

Haugen’s testimony hit all the right notes for the corporate media complex and Washington, from accusing Zuckerberg of having too much power and bringing up the January 6 Capitol riot and the 2020 election, to saying more government power is needed to protect children from social media addiction, which both she and the senators likened to tobacco.

She suggested Facebook suffered from “moral bankruptcy” for which it has to repent, and that government oversight would make it more profitable in the long run. She also argued against breaking it up, as the components would continue having the same problems but would be more difficult to oversee.

To hear Haugen tell it, she worked for a ‘civic integrity’ unit that was disbanded after the 2020 election. She specifically said she worked on ‘counter-espionage’, monitoring Chinese and Iranian activity on the platform – lining up another hearing about this being a “national security issue.”  Yet she did not bring up Facebook’s censorship of the New York Post story about Hunter Biden’s laptop, for example.

Facebook spokesman Andy Stone – who was also involved in the Hunter Biden cover-up affair – offered a rebuttal on Twitter, noting that Haugen “did not work on child safety or Instagram or research these issues and has no direct knowledge of the topic from her work at Facebook.”

In one exchange Haugen argued – and Sen. Blumenthal agreed – that the government and schools need to “make established information” to help parents protect their children if Facebook doesn’t want to.

This came just a day after the Justice Department sicced the FBI onto parents criticizing school boards around the country for teaching critical race theory, calling it potential domestic terrorism.

Skeptical commentators have pointed out that Haugen’s comments lined up with CNN, MSNBC and other corporate media outlets. The conservative-leaning outlets Daily Caller and Washington Free Beacon, meanwhile, found that Haugen has been a prolific donor to Senate Democrats in particular.

Haugen is also represented by the same lawyers – and former Democrat staffers – who backed the ‘whistleblower’ in the first impeachment against President Donald Trump, and the PR agency Bryson Gillette, where the current White House press secretary Jen Psaki worked until September 2020.