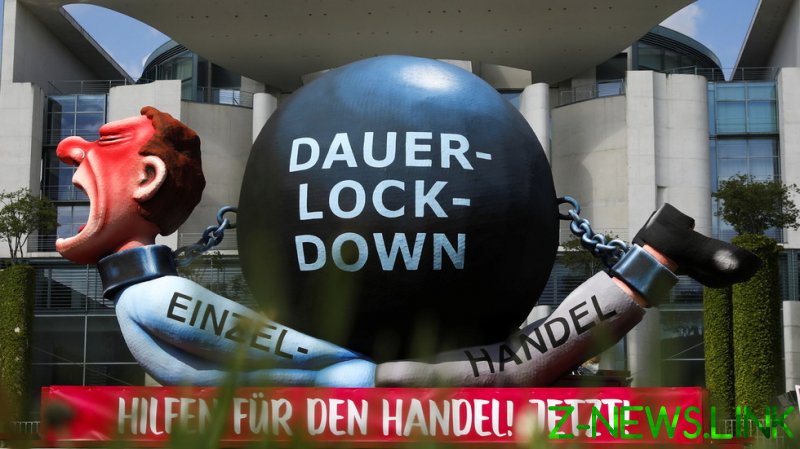 Facebook’s head of security policy Nathaniel Gleicher announced the action on Thursday, saying that his team has been working for months to “expand our network disruption efforts so we can address threats that come from groups of authentic accounts coordinating on our platform to cause social harm.”

The closest his post comes to defining “social harm” is content that “calls for violence or to discredit medical science.”

Gleicher says his group has removed a network of Facebook and Instagram accounts, pages and groups “for engaging in coordinated efforts to repeatedly violate our Community Standards, including posting harmful health misinformation, hate speech and incitement to violence.”

The Querdenken – German for “lateral thinking” – movement is “linked to off-platform violence and other social harms,” Gleicher wrote, adding that the content posted on the banned pages “primarily focused on promoting the conspiracy that the German government’s [Covid-19] restrictions are part of a larger plan to strip citizens of their freedoms and basic rights.”

According to Facebook, the group “typically portrayed violence as the way to overturn the pandemic-related government measures limiting personal freedoms.” The group “engaged in physical violence against journalists, police and medical practitioners in Germany,” Gleicher claimed citing “public reporting.”

There have been multiple mass protests against coronavirus lockdowns in Germany, with the authorities denouncing them as the work of the “far-right,” neo-Nazis and other extremists. While the UN special rapporteur on torture Nils Melzer raised concerns about police brutality in dispersing the demonstrations, last month, Berlin police responded that violence is “still part of our legal system.”

Facebook has cracked down hard on “debunked” and “false” claims about the Covid-19 pandemic, loosely defined as anything that contradicts the guidance by the World Health Organization or national health authorities. It stopped censoring the claim that the SARS-CoV-2 virus may have escaped from a lab in Wuhan, China back in May, however, citing “new facts and trends” that emerged.