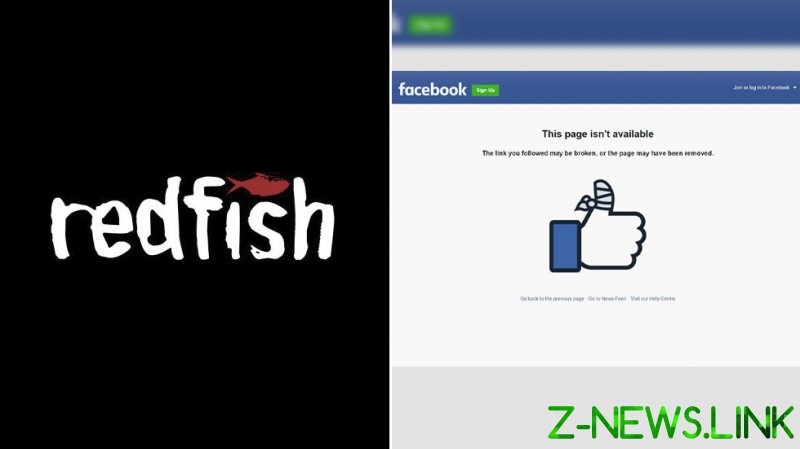 The company’s Facebook account was suspended on Friday after a recent post that criticized fascism. Redfish said Facebook deleted the page on the grounds that its posts commemorating the Holocaust and the defeat of Italian fascism violated its community standards.

The post in question featured an upside-down photo of Italy’s dictator Benito Mussolini. It was written on April 28, marking the day when Adolf Hitler’s Axis ally was executed.

It was the third post by the Redfish account to be taken down in a year, and it prompted a full suspension. Earlier in January, on Holocaust Memorial Day, Facebook removed a post showing historic photos of survivors of the Auschwitz death camp.

The photos were bizarrely flagged as violating rules on “nudity and sexual activity.”

RT reached out to Facebook for comment but, at the time of publication, is yet to receive a reply.

Last year, Facebook slapped Redfish’s account with a label warning readers that the company is “funded in whole or in part by the Russian government.” It was part of a larger drive by Big Tech to add alarming descriptors to media companies linked to countries that Washington perceives as its rivals.

The platform has made other questionable censorship decisions concerning historic photos. In May 2020, it prevented attempts to post a colorized version of the iconic photo of Soviet soldiers flying a flag over the captured Reichstag building in Germany. Facebook said the image broke “standards on dangerous individuals and organizations,” but later blamed a glitch in its algorithm for the blunder.

Still, RT’s divisions are getting used to facing obstacles. Last month, the company behind RT’s video agency Ruptly and RT DE Productions GmbH, which runs the German-language website, received a notice about their accounts being closed by German Commerzbank, something the channel considers a part of a wider campaign to obstruct its work in the European country.