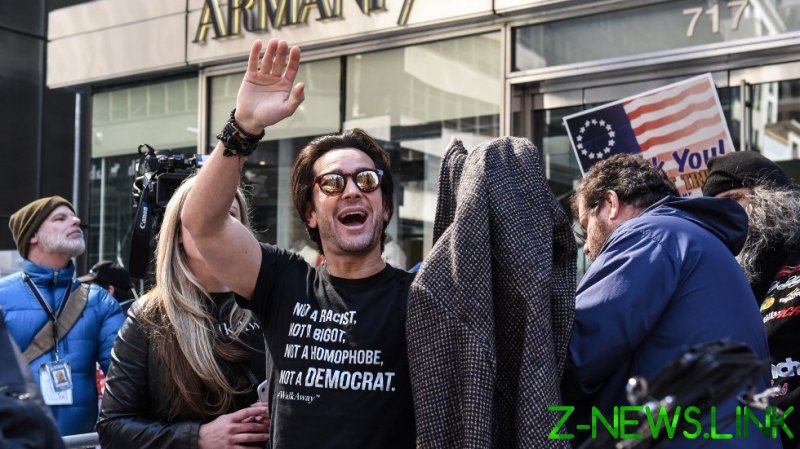 According to Straka, the group’s page was wiped from Facebook on Friday. In an email shared on Twitter by Straka, the tech titan said the movement’s page violated its terms of use, and though the precise reason for the ban wasn’t mentioned, the email listed “hateful, threatening, or obscene” content as potential factors.

Straka claimed that his own account was also banned, as were those of the entire WalkAway team. At time of writing, the movement’s page remains offline.

WalkAway had around half a million followers, but its sudden deletion was not Facebook’s highest-profile ban in recent days. The company banned President Trump himself from its platform on Thursday, with CEO Mark Zuckerberg writing that the indefinite ban was imposed after Trump allegedly used “our platform to incite violent insurrection against a democratically elected government.”

The “violent insurrection” took place a day earlier, when a crowd of pro-Trump protesters pushed their way into the US Capitol in Washington, DC, following a rally where the president spoke outside the White House. Though Trump appealed to the protesters to protest “peacefully and patriotically,” some forced their way into the building, vandalizing offices and clashing with police inside. One unarmed protester was shot dead by police, a police officer was fatally injured by a protester, and three other people died of “medical emergencies” amid the chaos.

Democrats, and some Republicans, wasted no time condemning the riot as an act of “insurrection” and “domestic terrorism.” Facebook responded by banning content in
“Praise and support of the storming of the US Capitol,” banning “incitement or encouragement” of the riot, forbidding posts about organizing similar protests, and deleting content encouraging users to “bring weapons to locations across the US.”

Facebook has also banned a host of what it calls “militarized social movements” from its platform, including militias like the ‘Oath Keepers’, conspiracy pages linked to the ‘QAnon’ movement, and pro-Trump groups like the ‘Proud Boys’. The Facebook team promised that they would “take additional measures if necessary to keep people safe.”

Conservatives and Trump supporters raged at the latest ban on Friday. Podcaster Tim Pool called the removal of Straka’s page the beginning of a “great purge” –  a mass rollout of online censorship that the Right has warned about since Trump’s election in 2016.

President Trump was also handed a temporary ban by Twitter, and indefinite bans by Twitch, Snapchat, and Instagram, the latter a subsidiary of Facebook. However Big Tech’s censorship drive was already in full swing before the events in Washington on Wednesday. President Trump has seen warning labels attached to his tweets disputing the results of November’s election, and sharing and commenting have been disabled on certain tweets. Facebook has also attached labels to tweets alleging election fraud, while YouTube has outright banned such content.