Eyes in the sky? Group claiming ‘Birds Aren’t Real’ & replaced by SPY DRONES takes its ‘tongue-in-beak’ warning on the road 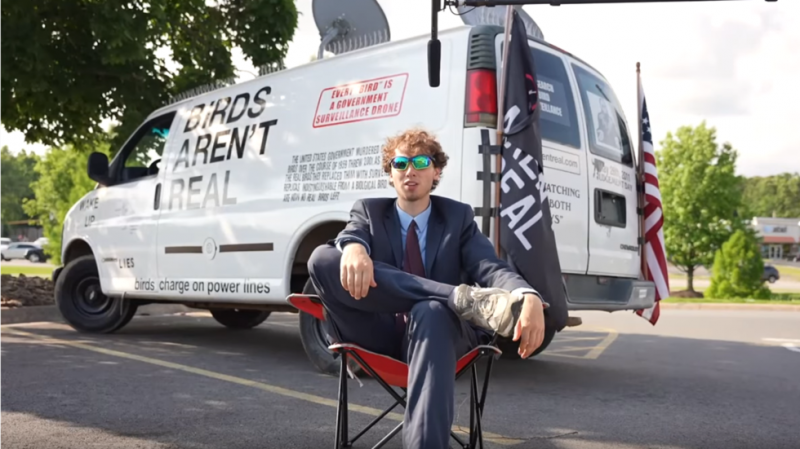 Dozens of demonstrators flocked to the city of Springfield, Missouri last week, to participate in a rally for ‘Birds Aren’t Real’, a group whose popularity has grown in recent years as a result of online hype and eye-catching publicity stunts.

According to the group’s website, the US government “genocided over 12 billion birds from 1959-2001” using a specially-designed virus. In place of these, battery-operated drones with cameras, microphones and wireless antennas were released to spy on people.

To support his claims, McIndoe has even shot an interview with a so-called “ex-CIA agent” sharing his story of a government cover-up.

The movement also cautions bird owners that their pets are “highly advanced governmental surveillance drones” that are “watching your every movement, picking up every word of your conversations, and sending that data into to the Pentagon.”

McIndoe claims the movement has been active since 1976 and has even released a supposedly “banned” TV advertisement from 1987 attesting to this. A more prosaic version of the story dates it back to 2017, when McIndoe held up a ‘Birds Aren’t Real’ signs during a women’s march in Memphis.

For anyone thinking the joke must’ve surely played out in the four years since, the merch-selling and billboard-buying group could well say “hold our beer.” They are now shooting a documentary video of their tour as they “spread awareness” of the conspiracy, and a teaser trailer shows McIndoe sharing some psy-op tactics to achieve their goal. The group operates by “tapping into the viral stream” and “packaging the truth in a comedic flow” that “disarms” people with humor and makes it easier for them to accept the said “truth,” he says.

Earlier this year, the group engaged in a supposed feud with Newsweek after ‘taking issue’ with being described as “performative satire” and “one big gag” in an article. They accused Newsweek of “journalistic gaslighting” and described the publication as “swamp media” and “fake news.”

In that March article, Newsweek claimed McIndoe – whose interviews are characterized by deadpan delivery and a refusal to break character – referred to Birds Aren’t Real as a “post-truth era comedy project” over email, when asked whether the movement was intended as a joke.

Clarifying over the phone later, however, McIndoe told the publication that whenever he types “Real movement, no comedy involved, it always autocorrects it to something like ‘meta-conspiracy parody-movement, showcasing post-truth-era absurdity’.”

Most articles on the movement theorize that ‘Birds Aren’t Real’ is satire poking fun at more influential and mainstream conspiracy theory groups like the ‘Flat Earthers’ and QAnon – something which McIndoe would, of course, deny. He’s also careful not to be pushing some spin-offs of his “message” too hard, once recording a video that asked the supporters to not believe a statement saying the Covid-19 pandemic was all for the government to replace the bird-drones’ batteries… because of course, they can always “recharge on power lines.”

In comments to the videos, some commenters are finding the statements to be the kind of humor that befits our times. Others are pointing out that there is no need to invent bird-drone conspiracies when most people have a smart device constantly spying on them in their very pockets.