Home / WORLD / Exposed: How British state tries to weaponise Russian-speakers in Baltics as ‘agents of change’ in operation to ‘weaken’ Moscow 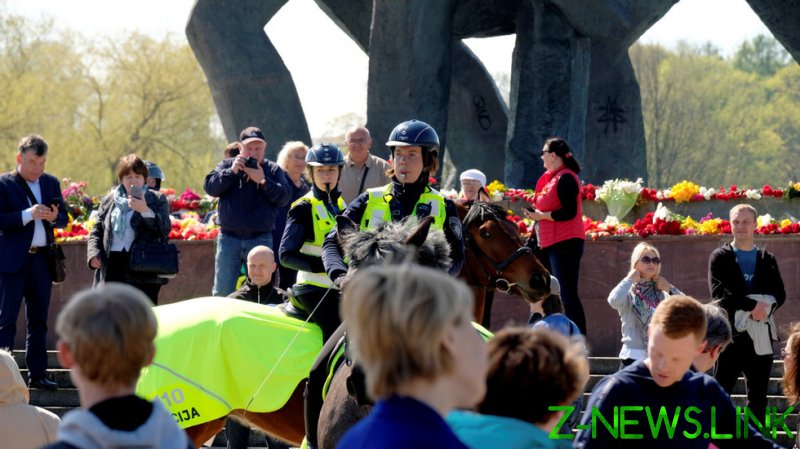 The UK government has for several years targeted residents of Estonia, Latvia and Lithuania, “whose primary language is Russian,” with a variety of information warfare strategies, in order to “develop greater affinity” among them for the UK, European Union and NATO, and to help “weaken the Russian state.”

This is explained in just some of the papers released by hacktivist collective Anonymous, which expose how Whitehall has sought to covertly infiltrate and co-opt civil society at every level across the former Soviet sphere, in order to further London’s financial, geopolitical and ideological interests.

The three Baltic states are home to around one million ethnic Russians – around one sixth of the region’s total residents. Following the collapse of the Soviet Union in December 1991, Lithuania quickly moved to grant these individuals citizenship – but conversely, Estonia and Latvia categorized them “non-citizens,” leaving a significant proportion of their respective populations effectively stateless.

Russophone inhabitants in those countries are consequently often unable to hold passports, vote, run for public office, work in a variety of professional fields, and more. They also claim to experience direct and indirect discrimination from authorities and citizens alike. Riga and Tallinn deny these charges, instead accusing Moscow of exploiting the issue for political purposes.

While many Russian-speakers in the region supported their host state’s quest for independence from the USSR, they maintain an empathy for their mother country, which disenfranchisement would undoubtedly amplify.

London began its effort to propagandize this “target audience” at least as early as 2016. A tender document indicates at some point that year, the UK Foreign, Commonwealth & Development Office (FCDO) reached out to an array of private contractors, asking for assistance in delivering “innovative soft power interventions” to “develop greater affinity with the UK/EU/Baltic States” among Russophones in the region.

The file, rampant with obvious disdain for the identity of the Baltics’ Russian minority, defines “soft power” as “the ability to affect others through the co-optive means of framing the agenda, persuading, and eliciting positive attraction in order to obtain preferred outcomes.”

It also outlines a five-step behavioral change program for targets, although achieving this is forecast to be somewhat problematic, given Russian-speakers 40 years old and above in the Baltics “have a strong affinity with Russia and [are] vulnerable to Russian propaganda,” as “they grew up under the Soviet system and have been shaped by its education and ‘culture.’”

“This makes them supportive of and advocates of (perhaps to the point of acting out) Russian narratives, and be primary consumers of its ‘culture,’” the document contemptuously contends. “They will have low awareness of; knowledge of; interest in; support for; or be advocates of Euro-Atlantic narratives and culture. They also probably lack the skills to critique the culture they consume. They are less likely to speak English so it will be necessary to engage them in their native tongue.”

Conversely, younger Russian speakers are considered more fruitful prey, on the basis “they grew up under national governments and have been shaped by their education.” As a result, they “have medium-high awareness, knowledge and interest of Euro-Atlantic narratives and ‘culture’” which “may make them more open to alternative narratives” and thus “less vulnerable to Russian propaganda.”

It may be instructive at this point to refer to a separate classified document related to Open Information Partnership, another FCDO-funded effort to discredit and destabilize Moscow.

It notes one key barrier to battling Russian “disinformation” is that “certain Kremlin-backed narratives are factually true” – “responding to inconvenient truths, as opposed to pure propaganda, is naturally more problematic.”

One such “inconvenient truth,” of course, could be that Russian-speakers in the Baltics are indeed subject to widespread discrimination, and Russian media reporting on the issue is thus inherently “problematic,” as it’s difficult to factually counter.

For example, a 2019 European Commission against Racism and Intolerance (ECRI) report highlighted several concerns around Latvia’s treatment of its Russian-speaking population. Among other things, it recorded that in May 2017, an MP from the far-right National Alliance party – which serves in the country’s coalition government – wrote an article for a national newspaper bemoaning how “hard” it was to remove “Russian lice” from one’s “fur.”

The ECRI also noted elected National Alliance representatives are often seen at annual commemorations in Riga celebrating soldiers of the Latvian Legion, a dedicated unit of the Waffen-SS that fought alongside the Nazis against Moscow during World War II.

While the ECRI’s findings were ignored by the Western media, the FCDO is acutely aware of such challenges – in a separate leaked file, Latvian government policy in respect of “non-citizens” is branded “detrimental to social cohesion,” by the department’s Counter Disinformation & Media Development chief Andy Pryce.

Another FCDO document sets out in even more disquieting detail the extent to which Whitehall seeks to understand the perceptions, motivations and habits of its Baltic targets, in order to identify “what can be done by the UK and national Governments to be more attractive” to Russian-speakers, and manipulate them accordingly.

London wished to identify their “life motivations and desires,” key interests, likes, hobbies, “current satisfaction of life and attitude towards it,” biggest fears, concerns, challenges, “hopes, dreams, aspirations for the future for themselves and their families,” and “existing or potential grievances against their government.”

In response, Albany Associates – a veteran of Whitehall-funded psyops in Syria, among other countries – submitted proposals to the FCDO, the dimensions of which were vast and troubling in the absolute extreme.

‘Exploit children to influence their parents’

No area of public, or even private, life was considered off limits for infiltration by the company, which is just one of several FCDO-bankrolled contractors attempting to influence and shape the thoughts and actions of inhabitants of the region for political means, without their knowledge or consent.

For instance, Albany pledged to exploit the region’s Russian-speaking youth as “agents of change to influence their parents’ and grandparents’ generations and amplify a distinct ‘Euro-Baltic’ identity.”

One method of doing so was surreptitious sponsorship of “family-centred direct outreach events,” complemented by the staging of “a minimum of 75” cultural activities “in carefully selected Baltic communities,” ostensibly hosted by Estonia’s Vita Tiim, Latvia’s Jasma, and Lithuania’s Youth Initiative Group.

These events – projected to involve “direct engagement of approximately 6,750 people, with a special focus on attracting the 40-60 age group” – were to be held at weekends “to maximize turnout.” This included family movie nights, city-wide competitions, quiz tournaments, “mother and daughter afternoon tea parties” designed to “leverage female influence in society,” and “youth theatre performances.”

One proposed example of the latter activity entailed funding Lithuanian theatrical group Harlequin to produce and tour “a strategically and collaboratively written play” throughout the region. Its plot centred on “contested identities in Russian-speaking families and inter-generational frictions.”

Likewise, films aired at Albany’s screenings would be carefully selected by “local experts” to both “ensure critical mass of interest,” and “spark discussion on Euro-Atlantic values and narratives,” among viewers.

These events would be greatly amplified by various information campaigns on and offline, in order to “open Russian speakers’ minds” – news outlets “preferred by Russian minorities” blitzed with op-eds on “Russian-speakers benefiting from the EU and other Euro-Atlantic institutions,” online media platforms with “articles, blogs and videos amplifying Baltic life, including art, music, [and] media.”

Albany’s primary local partner in these efforts was to be marketing firm Inspired, said to already manage a Latvian/Russian news portal with a user base of around 400,000, and have previously led a “successful campaign on European currency transition.”

The pair sought to identify and cultivate a network of the region’s “most powerful” online influencers in order to secretly “seed online conversations” with Whitehall-approved key messaging, creating a Facebook page to “disseminate information on Baltic Euro-leaning heritage,” and promote the various cultural events covertly convened by Albany.

Users were to be oblivious that their engagement with the platform would be keenly scrutinized by the FCDO contractor, in order to optimize its propaganda output.

“Participatory conversation will be encouraged on the platform, then analysed throughout to gauge sentiment, refine influencer maps and establish key themes,” Albany wrote. “The campaign will be launched and carefully seeded in Russian on appropriate social media channels according to a tailored strategy. It will also use key dates and events of significance to Russian speakers, such as WWII celebrations as a way of inserting itself into pre-existing conversations to amplify the campaign effects.”

Prior to the leak of these files, suggestions the UK government was secretly funding quiz nights, theatre productions, maternal tea parties, social media influencers and more in the Baltic countries to undermine Russia, and in the process using unwitting youths as “agents” to manipulate their forebears, could easily be dismissed as the deranged ramblings of a conspiracy theorist.

However, the documents lay bare in black and white that London has indeed been waging an insidious conspiracy in the region, as wide-ranging as it is sinister, and will stop at nothing to demonize, destabilize and isolate Moscow nationally and internationally.