Home / WORLD / Explosions in Mogadishu: the death toll has risen to 23 people

Explosions in Mogadishu: the death toll has risen to 23 people 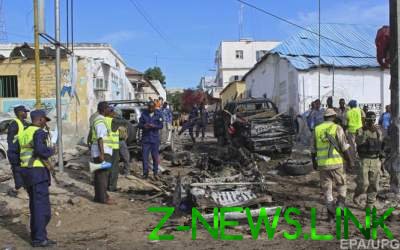 23 people were killed and over 30 were injured during the terrorist attack in the Somali capital.

As a result of two explosions located near the presidential Palace hotel in the Somali capital Mogadishu has killed at least 23 people and more than 30 were injured. This is stated in the Associated Press.

According to police captain Mohamed Hussein, who is on the scene, three of the five attackers were killed.

According to police, most of the victims – the police, among the victims is also a former member of the Somali Parliament.
Earlier it was reported that in the second half Saturday, October 28, in the Somali capital, Mogadishu, two explosions occurred.

A suicide bomber car drove into the gate of the hotel Naso Hablod Two and blew himself up. The hotel is located near the presidential Palace. After that, the building stormed by armed men in military uniform. Between the attackers and police officers began shooting.

See also:  On what cars the richest people on the planet. Photo

A few minutes after the first explosion nearby rocked the second. A car exploded at the building, which formerly met the Parliament.

Responsibility for the attack was assumed already by the Islamist group Al-Shabab, which is linked with al-Qaeda.