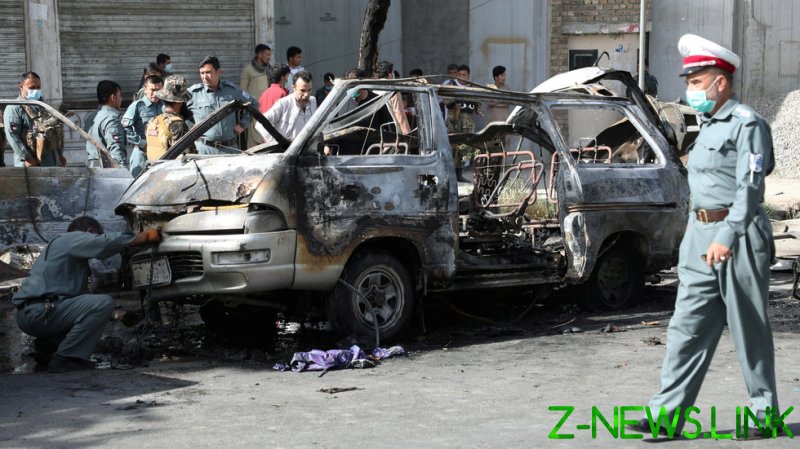 The explosions rocked western Kabul on Saturday, with the attacks occurring in neighborhoods predominantly inhabited by the Shiite Hazara minority.

Six people were killed by the first blast, with another person left dead by the second explosion, a spokesman for the Afghan Interior Ministry, Tariq Arian, told local media. A total of six people were injured by the blast, Kabul police spokesman Basir Mujahid added.

Footage circulating online shows one of the buses completely engulfed in flames, surrounded by debris. It was not immediately clear whether the vehicle was hit by a roadside bomb or if the explosive device was on board.

No militant group has claimed responsibility for the attacks. Earlier this month, Kabul’s Hazara minority was targeted by similar attacks on buses that left 12 people dead.

Back in May, some 80 people, primarily schoolgirls, were left dead after multiple blasts rocked a school located in the same area. The gruesome attack has not been claimed by any militant group, with the main adversary of the Afghan government, the Taliban, strongly denying involvement and condemning the attack on children. At the time, the Taliban pointed fingers at Islamic State (IS, formerly ISIS) terrorists, known for their hardline views and particular hatred displayed towards Shiite Muslims.

In recent weeks, Afghanistan has seen an uptick in violence, with fighting between the Taliban and Afghan security forces intensifying, as well as assorted terrorist attacks occurring on a nearly daily basis. The unrest comes as the September 11 deadline for the withdrawal of foreign troops from the country, set by US President Joe Biden, approaches, while talks between the Kabul government and Taliban have stalled.