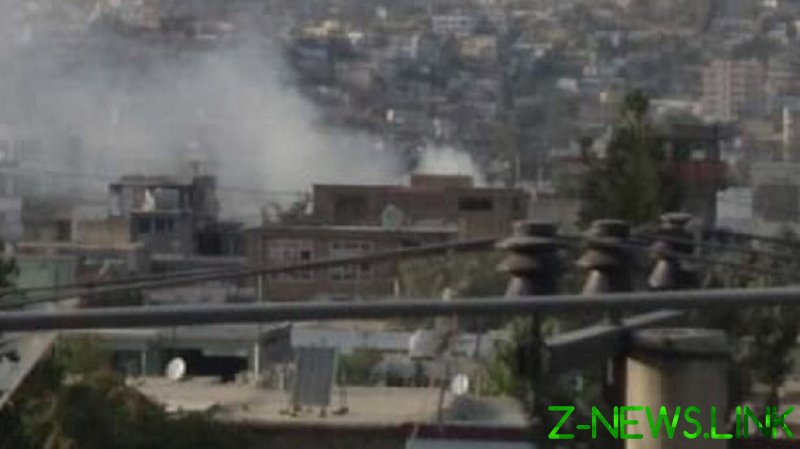 Images shared on Twitter show a cloud of black smoke rising from the supposed site of the blast, which looks to be in a residential area.

The explosion was caused by a rocket striking a house near the airport, BBC journalist Secunder Kermani reported, citing a source in the Afghan Health Ministry. A police chief told the AP news agency that a child was killed in the blast, and unconfirmed reports claim that at least one other person is dead and at least three are injured.

Reporting from Kabul, RT’s Khaled al-Jaburi said that the “violent” explosion was followed by the launch of five rockets from an unknown area. The explosion took place on al-Shaheed Street, which leads to the airport.

Tensions are running high in Kabul, after a suicide bomber killed more than 150 people outside the airport on Thursday, including 13 US troops. Islamic State Khorasan Province (ISIS-K), a regional offshoot of Islamic State (IS, formerly ISIS), claimed responsibility for the attack, and a US drone strike was launched in response, with the Pentagon claiming to have killed an ISIS-K “planner” and another “facilitator,” but declining to release either’s names.

US officials had warned of an imminent attack before Thursday’s bombing, and President Joe Biden issued a similar warning on Saturday, saying that another attack was “highly likely” within the next 24-36 hours. Within hours of Biden’s statement, the US embassy in Kabul advised the remaining Americans in the city to avoid traveling to the airport due to a “specific” and “credible” threat in the surrounding area.

It is unclear, however, if the apparent rocket attack was the same threat Biden and the embassy were warning about.

The attack could also have been carried out by the US, which launched a “military strike” on suspected ISIS-K militants in the city on Sunday, according to officials who spoke to Reuters. It is still unclear whether the US strike and the explosion are linked.

The US evacuation of Kabul is due to wrap up by Tuesday, with the Taliban warning of “consequences” should Americans remain in Afghanistan past this date. In the two weeks since the Islamist militants seized control of Kabul, the US has airlifted more than 117,000 people out of the city, Major General Hank Taylor told reporters on Saturday. The “vast majority” of these evacuees were Afghan refugees and Special Immigrant Visa applicants, Taylor added, while approximately 5,400 were American citizens.