Experts warn MURDER HORNETS could resurface in US in the spring 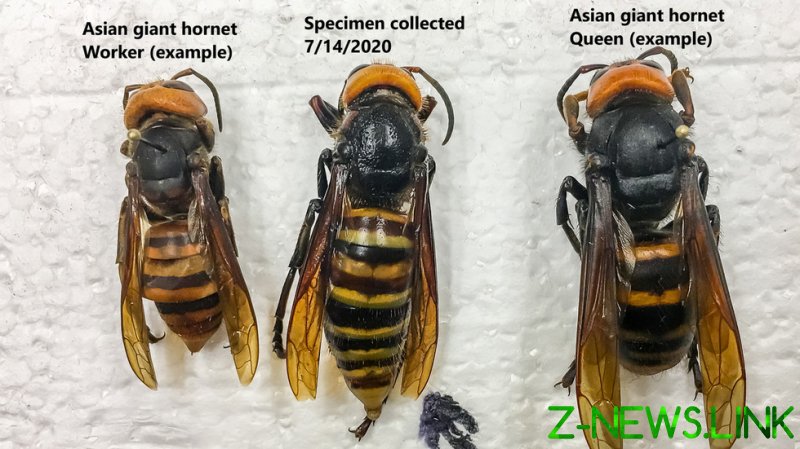 “Only the queens survive the winter, and right now, any [hornet] hibernating won’t come out until it’s warm enough to do so, in mid-to-late April,” Doug Yanega, a scientist at the Entomology Research Museum in California who has studied murder hornets, told the New York Post.

Murder hornets gained nationwide attention last year after the first nest in the US was found in December 2019. It was later dismantled by the Washington State Department of Agriculture (WSDA). The Asian hornets are the biggest in the world with a wingspan of 7cm (3 inches) and a 0.6cm-long (quarter of an inch) stinger. They can kill humans if they sting enough and pose a threat to honey bees as they are known to invade their nests and kill them.

According to Yanega, queen murder hornets could start producing in the spring, and “workers” would subsequently begin multiplying and growing the population by May or June. He did add, however, that a migration to the East Coast of the US will not happen anytime soon based on past geographical data for the species.

Karla Salp of the Washington State Department of Agriculture also said the spring is when the Asian hornets are known to resurface.

“[Murder hornets] are basically in the ground or trees over winter, and then they start emerging in the spring,” she said.

Officials in Washington, where the hornets were spotted, are reportedly planning to set up traps to keep the potential hornets in the northwest corner of the state. The specifics of these plans will be announced in a press conference on Monday.