Home / policy / Expert: Protests in Khabarovsk can infect other regions

Expert: Protests in Khabarovsk can infect other regions 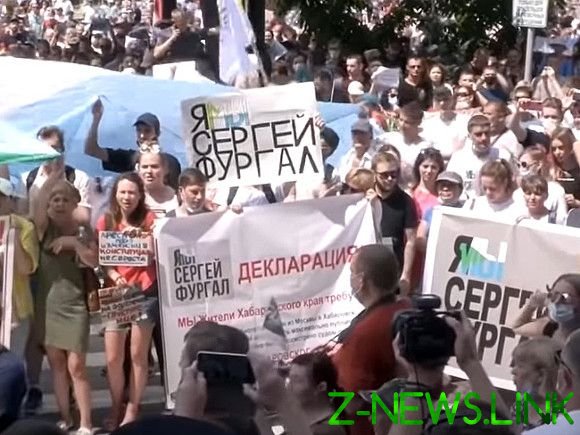 Protests in Khabarovsk will undergo transformation and will spread to other regions, suggested in conversation with the correspondent of “Rosbalt” by the Director of the Centre for the development of regional policy Ilya Graschenkov. In his opinion, the Kremlin is idle, because he hoped that the opposition campaign will fizzle out by themselves.

“Really, people can’t endlessly go out, this logic is clear. On the other hand, if the protest will begin to develop political demands, even though he may of numerical decline, but it will grow inside. Will come, maybe not thirty thousand people, and five, but tightly focused on a certain ideology, with the understanding, to which they come,” — said the expert.

According to the analyst, this gives you the opportunity to expand the protest at any time.

“In Moscow in 2011 so it was. First out hundreds of thousands of people, then less, but at the right time were able to deploy up to 20-30 thousand people. I mean, you know, in such actions is much more important that they are not blown away in terms of political demands”, — said the Graschenkov.

He suggested that the Khabarovsk protests just will not go away, this is the first sign that indicates the people’s discontent with living standards. Rallies, according to experts, is expected in Yakutia, Primorye, Buryatia and other regions.

Ilya Graschenkov told the readers of “Rosbalt” why Khabarovsk increasingly against Putin.