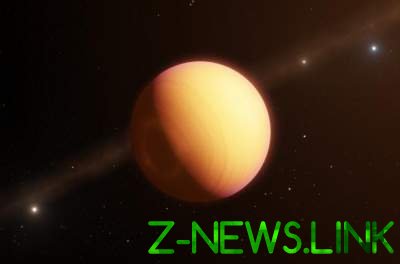 The planet is at a distance of 129 light years from Earth.

Astronomers using the Very large telescope have for the first time able to conduct observations of exoplanets by the method of optical interferometry. As reported by the European southern Observatory, the researchers were able to observe the planet’s complex atmosphere with iron-silicate clouds and global storm.

The researchers watched the HR8799e exoplanets orbiting a young star at a distance of 129 light years from Earth in the constellation Pegasus. For observations, the researchers used a GRAVITY receiver, mounted on the telescope.

HR8799e is a super – Jupiter, it’s a lot bigger and younger than any planet discovered in the Solar system. The age of the planet is “only” 30 million years, unspent energy of her education and a powerful greenhouse effect HR8799e heated to a temperature of about 1000 °C.

“Our analysis showed that the HR8799e atmosphere contains much more carbon monoxide than methane – it is unclear from the point of view of chemical equilibrium processes. We think that this unexpected result is best explained by vertical winds in the upper atmosphere that do not allow carbon monoxide gas to react with hydrogen and form methane,” said lead author Sylvestre Lacour.

The group found in the planet’s atmosphere also clouds of iron and silicate dust. In combination with excess carbon monoxide this shows that the atmosphere HR8799e covered by a giant storm.