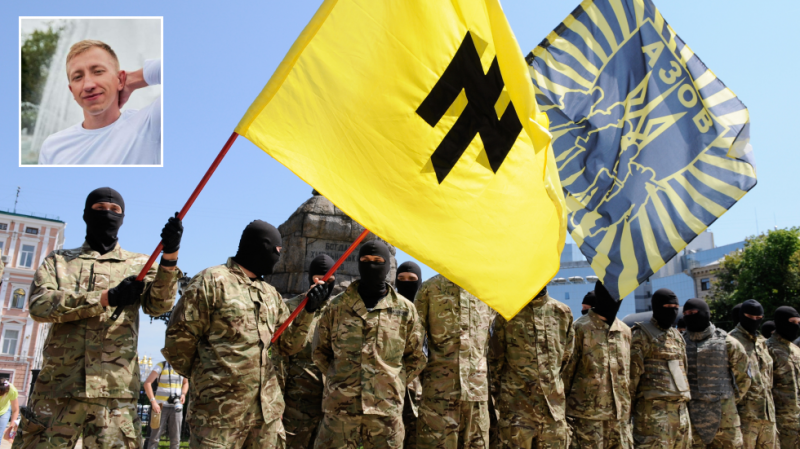 However, his purported far-right ties have been completely ignored by Western media.

On Tuesday, police in Kiev announced that they had discovered Shishov’s body in a park. He had been declared missing the day before after he failed to return home after setting out for a run. An official statement said that he had been found hanged in a park close by, and that a murder probe had been opened to investigate any potential foul play. According to independent Ukrainian news outlet Strana, an anonymous police source initially insisted all signs pointed to suicide.

The group that the activist headed, Belarusian House in Ukraine, was unconvinced by that explanation. It responded with a fiery message released on its Telegram channel, claiming that his death was part of a “planned operation” designed to “eliminate a Belarusian who was really dangerous for the regime,” and vowed to push for the truth around the incident.

Despite never having been a prominent member of the opposition, Shishov is said to have fled the troubled Eastern European nation as authorities violently cracked down on activists in the wake of last summer’s presidential election, which many international observers say was rigged in favor of veteran leader Alexander Lukashenko. Since then, he has, according to his organization, been working to support others fleeing the country, as well as planning actions against the government in Minsk.

Opponents of Lukashenko claim that his security forces are orchestrating a series of operations to capture and even kill his detractors, both at home and abroad. Previous investigations by German state broadcaster DW alleged that officials sanctioned death squads to abduct and murder politicians more than two decades ago, as the country emerged, newly independent, from the collapse of the Soviet Union.

Some insist that this practice is now being revived to deal with the new generation of opposition activists involved in last summer’s crisis and residing abroad. The grounding of a Ryanair flight and the arrest of blogger Roman Protasevich is cited as evidence that the embattled government will stop at no lengths to silence its critics.

While there appears to be no solid evidence linking Belarusian special services to the death of Shishov at present, another avenue of speculation has simultaneously opened up online. A number of commentators and analysts have reported that the activist has close links to the Ukrainian far-right, and that Belarusian House in Ukraine is linked to unsavory groups.

The same charge has been leveled against his fellow countryman, Protasevich, who is alleged to have fought with a notorious neo-Nazi unit, the Azov Battalion, against breakaway militants during the civil war in Donbass. The self-proclaimed breakaway Lugansk People’s Republic has even filed a request with Belarusian prosecutors to extradite the detained activist, who was said to be pictured wearing Nazi iconography and carrying a rifle.

In Shishov’s case, the links appear less clear. Matthew Shaas, advocacy director of Freedom Now, an American criminal justice NGO funded by George Soros’ Open Society Foundations, tweeted his concerns about the Belarusian on Wednesday. “Belarus House has apparent connections with Sergey Korotikh, a neo-Nazi active in Belarus, Russia, & now Ukraine,” he said, adding that “this is likely highly relevant to the story.”

On Wednesday, as the circumstances of Shishov’s death were still unfolding, the Ukrainian security service, the SBU, confirmed that his deputy at Belarusian House, Rodion Batulin, had been barred from entering the country. According to officials, the activist is “is known for his radical views and provocative actions during protests in Ukraine.”

Zaborona, a controversial but generally well-regarded Ukrainian news outlet, has probed the group’s supposed links to the far-right. In November 2020, representatives of Shishov’s organization reportedly attended the unveiling of a monument to the victims of Belarus’ police crackdown near the country’s embassy in Kiev, organized by Korotikh. Korotikh himself is frequently branded a neo-Nazi and was, in effect, the spokesperson for the far-right Azov movement to which Protasevich reportedly belonged. In recent years, he has been accused of publishing material denying the Holocaust and labelling US President Joe Biden a “pedophile.”

In addition, when news broke of Shishov’s death, Korotikh wrote on his Telegram channel that he had been his “comrade and brother in arms,” arguing that the death was actually an orchestrated murder. Then, in a strange twist, Korotikh went on to blame “the collective West” for the events.

While the nature of the relationship between Korotikh and Shishov remains unclear, and the police continue to probe the tragic death of the young Belarusian activist, the media narrative around the events will likely continue to miss the wider context. Worse still, it seems few are asking why several of the prominent and Western-backed opponents of Belarus’ brutal government appear to have close ties with neo-Nazis and the far right.

This is another example of a notable, and dishonest, trend in Western reporting from Eastern Europe, where those who oppose ‘regimes’ considered distasteful by elites in Britain, the European Union, and the US are automatically elevated to a sort of ‘saintly’ status. As a result, any unsavoury elements of their characters, or nefarious ties they may have, are glossed over to fit a narrative. Naturally, such practice is both unethical, under traditional norms of journalism, and deeply unfair to consumers of the media outlets concerned.