Example: Barcelona clinched the title, atlético escaped from the “real” 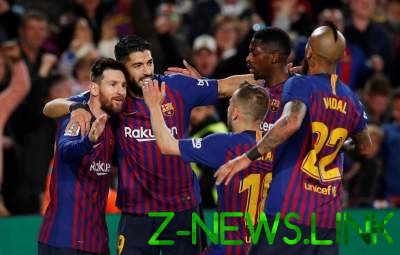 In the championship of Spain on football played the match 35-th round.

Barcelona after win against Levante UD in 3 rounds before the end of the season scored 26th League title in the club’s history. The Catalans before the final month of the season retain an excellent chance to treble cone, reaching the semi-finals of the Champions League and the final of the Spanish Cup.

After the 35-th round everything was finally clear in the fight for second place and the strongest club of Madrid. “Real” sensationally lost “Rayo Vallecano” and kept only theoretical chances to fight with Atletico.

The battle for the Champions League zone in Spain is not much different from the situation in the championship of England. In the 35th round all the main contenders synchronously suffered defeats that has kept Getafe in fourth place.

Results of matches of the 35th round: