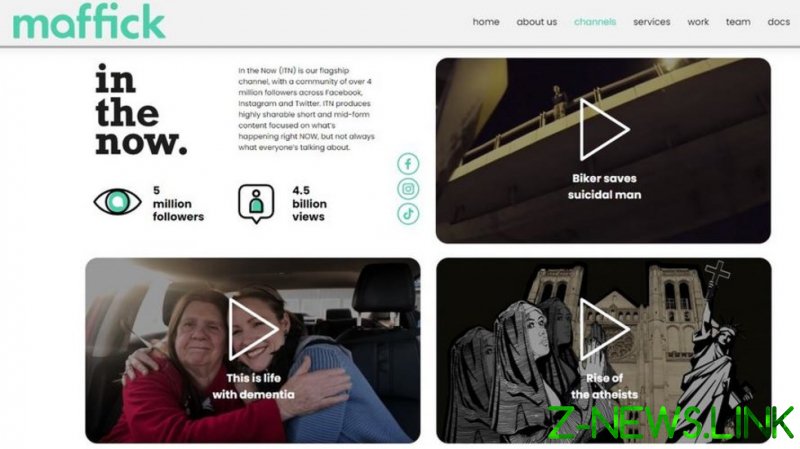 The FARA registration, which the company announced on Monday, came after its legal team concluded that any attempts “to prove its independence … would be unlikely to yield a positive result without costly and time-consuming litigation,” Maffick LLC said in a statement provided to RT. It added that it had been the target of “a powerful and pervasive political agenda to paint any tie with Russia … as something nefarious.”

‘In The Now’ remains one of Maffick’s best-known productions, along with ‘Soapbox’, which focuses on political commentary.

“Our most well-known brand ‘In the Now’ was born out of a TV show that started at RT, and so we will never be seen as the independent media organization we truly are by the powers-that-be. This registration is acceptance of that truth and nothing more,” Maffick LLC said.

When they deal with politics, short videos produced by the company tend to be highly critical of US foreign policy, particularly in the Middle East and Latin America. Western mainstream media outlets have long branded Maffick an arm of Russian propaganda designed to evade being flagged as such and to appeal to left-leaning millennials.

In 2018, amid an investigation by CNN, Facebook suspended Maffick accounts. In the summer of 2020, when US-based social media platforms such as Twitter and Facebook began the labeling of foreign media outlets and journalists, Maffick’s channels were designated as Russian “state-affiliated” or “state-controlled” media. Naouai insists she and her team have full editorial independence.

“Maffick LLC will not succumb to bullying, even from the highest and most powerful establishment towers. More importantly, we will continue to do our purpose-driven work, cultivate compassionate, talented teams who give their all to their work, and we will focus on how grateful we are for that,” the company said in a statement.