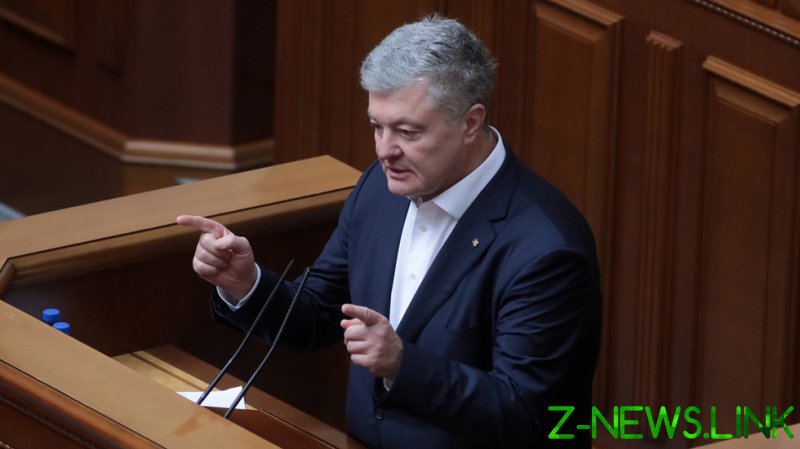 Ukraine’s former president, Petro Poroshenko, has had his assets frozen by a court amid a high treason case over financial dealings with separatists. Poroshenko says he’ll fight to clear his name on his return home from Poland.

Poroshenko’s assets were arrested by a Kiev court on Thursday. They reportedly include a mansion outside Kiev, two apartments, land plots, and shares of several companies held by the former president.

Poroshenko’s legal team has branded the court decision as a politically-charged persecution by the incumbent government of President Volodymyr Zelensky, and vowed he would appeal the arrest of his assets. Poroshenko was targeted by the criminal case back in December, facing multiple charges ranging from “facilitating the activities of terrorist organizations” to high treason.

The case revolves around an alleged conspiracy to purchase coal from the breakaway republics of Donetsk and Lugansk. The amount of goods traded was estimated to be about 1.5 billion hryvnias (nearly $55 million), according to Ukrainian prosecutors. Apart from Poroshenko, the conspiracy allegedly involved unspecified “representatives of the top leadership of the Russian Federation.”

The Ukrainian judiciary failed to deliver a questioning notice to Poroshenko in December, with the former leader, who currently holds a seat in the country’s parliament, abruptly leaving Ukraine for a “pre-scheduled” trip. The politician was ultimately informed of the charges in absentia, with his opponents accusing him of fleeing the country.

Poroshenko, however, maintains that this is not the case, promising to return to Ukraine later in January. He reiterated his resolve to face the prosecutors in a Facebook post on Thursday.

“On January 17, I, as promised, will return to Kiev to appear in court and have a meeting with the Attorney General, using the right of an MP to get an emergency reception. I am returning not to defend myself from [President Volodymyr] Zelensky, but to protect Ukraine from incompetent leadership and external aggression,” Poroshenko said.

Viktor Medvedchuk, one of the leaders of Opposition Platform — For Life (OPFL), the most popular political party in eastern Ukraine, who’s been labeled as “the Kremlin ally” in the media, was also placed under house arrest last year after being charged with treason.

In 2021, Zelensky moved to ban several opposition TV channels, similarly accused of spreading a pro-Russian narrative, in what his critics have called a stifling attack on the freedom of press.