Ex-president arrested at US request 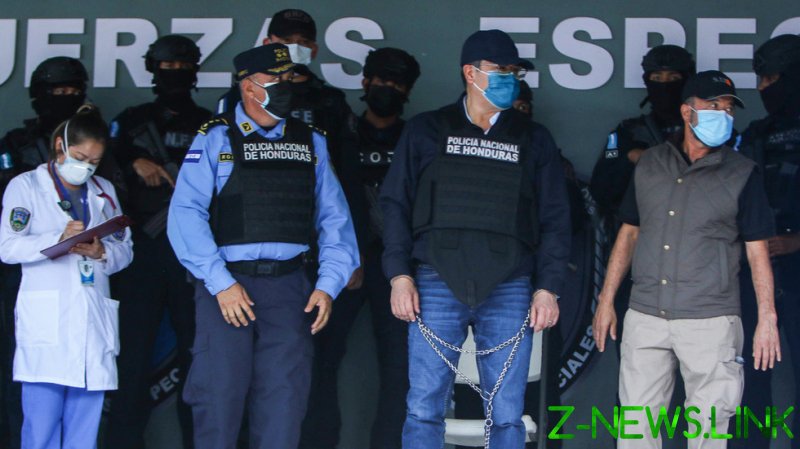 Law enforcement in Honduras on Monday arrested the country’s ex-president Juan Orlando Hernandez, who is wanted in the US over his alleged involvement in drug trafficking and other crimes. Hernandez said he was willing to surrender himself.

The former leader, who ruled Honduras between 2014 and January this year, was taken into custody at his home in the capital Tegucigalpa. Police surrounded the building just hours after the US issued a request to extradite the man, and moved in after a top Honduran court issued the warrant.

A US federal court in New York has accused Hernandez of profiting from the illegal drugs trade in Honduras, which serves as a major transit country for narcotics smuggled into the US. While in office, he allegedly received briefcases stuffed with cash from drug cartels and was actively participating in organized crime. His younger brother, Tony Hernandez, is serving life in prison after being sentenced by a US court last year.

The former president has denied all allegations against him. In an audio address released on social media before his arrest, he said he was ready to defend himself in the US justice system.

The Hernandez presidency was marred by widespread allegations of government corruption and mass protests. His party pushed through a constitutional amendment allowing him to stand for reelection in 2017, which he won in what observers called a rigged vote. He didn’t seek a third term in the 2021 general election. Leftist candidate Xiomara Castro beat her opponent from Hernandez’s National Party last year.

Before that, the National Party had won every election in Honduras since the 2009 military coup, which ousted Castro’s husband, Manuel Zelaya. Ironically, Honduran generals justified the takeover by accusing him of trying to alter the constitution to allow himself to run for a second term.