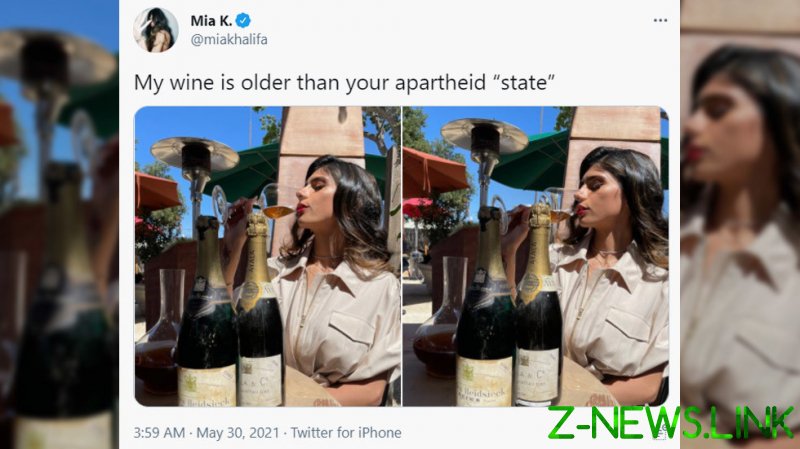 “My wine is older than your apartheid ‘state’” wrote Khalifa in the Twitter post, which showed her drinking a 1943 bottle of Charles Heidsieck champagne from France.

Some social media users, however, responded by accusing Khalifa of anti-Semitism for drinking a “Nazi wine” – noting that France was occupied by Nazi Germany in 1943.

“You’re drinking wine made in 1943 Nazi-occupied France, while denying thousands of years of Jewish history in our ancestral homeland. Glad you found the perfect pairing for your antisemitism!” commented Israeli writer Hen Mazzig, while American conservative Jack Posobiec questioned, “Who was running France in 1943 when that wine was made?”

Though France was occupied by Nazi Germany in 1943, Khalifa’s bottle was in English, contained references to Great Britain, and displayed a “By appointment to H.M. King George VI” label – indicating that the bottle was for the British market.

After receiving criticism, Khalifa denied accusations of anti-Semitism, noting that the wine had “Royal Warrants from His Majesty King George VI” and that Great Britain “was not part of the axis power in 1943.”

Another Twitter user claimed that 1943 “was the harvest year” and “would have been bottled no earlier than January 1944,” where it would have subsequently aged “for no less than 18 months.”

“So a label showing 1943 wasn’t attached until late 1945,” the commenter argued. France was liberated from German occupation in August 1944.