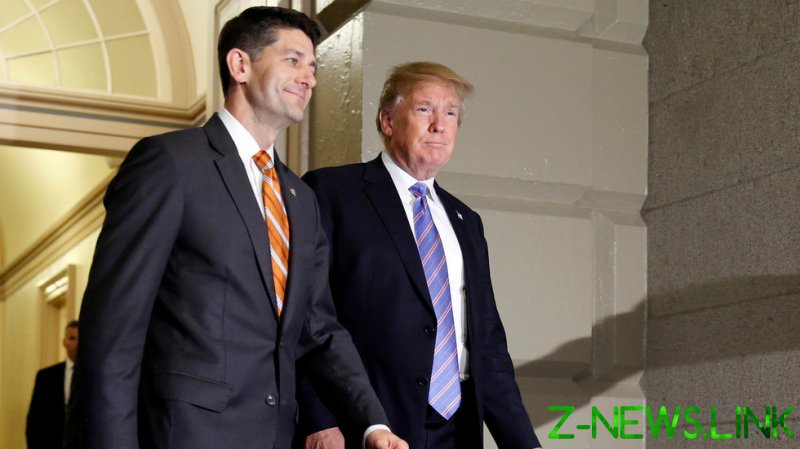 Efforts to challenge the results of the November 3 presidential election “strike at the foundation of our public,” Ryan said on Sunday. The Wisconsin Republican, who was House speaker during President Donald Trump’s first two years in office, added that “it is difficult to conceive of a more anti-democratic and anti-conservative act than a federal intervention to overturn the results of state-certified elections and disenfranchise millions of Americans.”

At least 12 GOP senators have said they will challenge disputed outcomes from several states when electoral results come up for certification by Congress on January 6. A group led by Senator Ted Cruz (R-Texas) demanded that an emergency commission be formed to conduct a 10-day audit of election results in states where Trump has alleged massive fraud.

Four Republican Senators — Mitt Romney of Utah, Susan Collins of Maine, Lisa Murkowski of Alaska and Bill Cassidy of Louisiana – joined with Democrats in a statement on Sunday calling for Congress to formalize President-elect Biden’s victory. Seven House Republicans also issued a statement Sunday, saying the authority of states to declare their election results valid must be respected.

The certification fight has emerged as a loyalty test, with Trump supporters demanding that Republican lawmakers join in the challenge or face political payback.

Ryan argued that Trump’s campaign had “ample opportunity” to challenge the election results in court, “and those efforts failed from lack of evidence.” With the legal channel exhausted and results “decisively confirmed,” he added, “Biden’s victory is entirely legitimate.”

While some Biden supporters rushed to praise the former Speaker, others faulted him for enabling Trump in the first place.

“Paul Ryan speaks out now after enabling Trump for 2 years and helping to create the path to destruction he was on. No thanks,” one commenter said.

“He had a chance years ago to speak out against Trump’s malfeasance, but he chose not to,” another tweeted. “Like (Senator Ben) Sasse, Ryan is focused on his future political ambitions.”

Some pointed out that Ryan is a board member with right-wing network Fox News, and could have influenced the programming if he cared enough.

The statement did not sit well with Trump supporters as well. Some suggested that Ryan is a clout searcher who is seeking to thrust himself back into the political spotlight.

“Why does Paul Ryan keep making public statements as if he’s an influential Republican politician? After all, he just joined TENEO – a lobby shop operated by Bill Clinton’s advisors,” she tweeted.

Conservatives also accused Ryan of failing to keep the GOP in control of the House. “This is a great time to remember that Paul Ryan sabotaged Trump’s first two years in office, lost the House and gave us Speaker (Nancy) Pelosi,” one observer said.

While others, like conservative author Melissa Tate dismissed his take on the issue as unimportant, saying, “Paul Ryan is like MySpace: obsolete and irrelevant.”