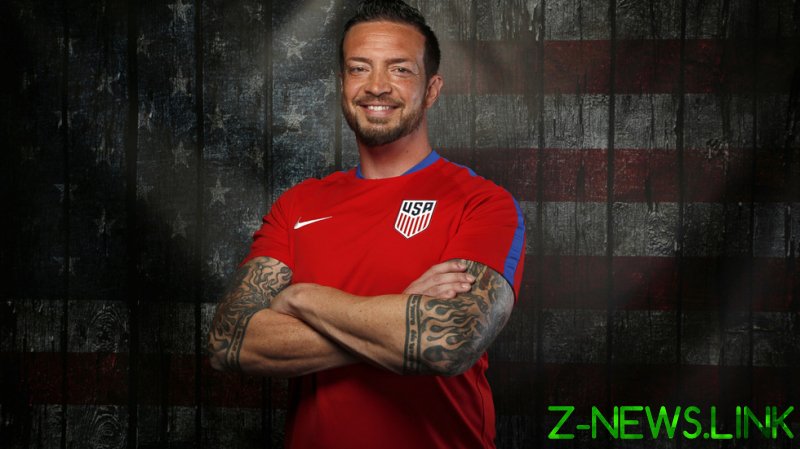 Seth Jahn, a former member of the US seven-a-side Paralympic team, was speaking in opposition to the policy which was put in place in support of United States football superstar Megan Rapinoe’s decision to follow the lead of ex-NFL player Colin Kaepernick by carrying out silent “kneeling” protests before games.

The United States Soccer Federation voted at the weekend to repeal the 2017 law which required players to stand for the playing of national anthem, with more than 70% of votes supporting the motion to remove it.

Jahn was highly critical of the mooted move, which he said he saw as part of a wider campaign which has been popularized by the ‘woke’ mob in recent months.

“I’m sure I’m going to ruffle some feathers with what I’m about to say, especially given the athletes council that I’m on,” the 38-year-old accepted at the outset of his impassioned address.

“But given the evolution of our, quote-unquote, progressive culture, where everything offends everybody, those willing to take a knee our for anthem don’t care about defending half of our country and, when they do so, then I don’t have too much concern in also exercising my First Amendment right.

“We’re here to get a different perspective. I also feel compelled to articulate that I’m of mixed race and representative of undoubtedly the most persecuted people in our country’s history, Native-Americans.”

The wave of pre-match ‘kneeling’ protests was popularized by former San Francisco 49ers quarterback Colin Kaepernick in 2016 and has since become a feature of many sporting events around the world amid a broader debate on race relations and police brutality.

The movement was amplified further following the death of unarmed African-American man George Floyd in police custody last year, with cell phone footage of the incident sparking numerous bouts of social unrest in the United States.

The Black Lives Matter campaign has since been supported in the English Premier League, with players and officials continuing to kneel before the kick-off of each game.

“Every race in the history of mankind has been enslaved by another demographic at some point in time,” Jahn continued.

“Where were the social justice warriors and the news journalists there to bring their ruminations to these real atrocities? And yet in all of history, only one country has fought to abolish slavery: the United States of America, where nearly 400,000 men died to fight for the abolishment of slavery underneath the same stars and bars that our athletes take a knee for. Their sacrifice is tainted with every knee that touches the ground.”

Jahn added that he welcomed athletes’ rights to have their voices heard, but suggested they do so in their personal time and not while representing the US in international sporting events.

Jahn’s removal was revealed in a statement on Sunday, when the federation found that he had “violated the prohibited conduct’s policy section on harassment, which prohibits racial or other harassment based upon a person’s protected status (race), including any verbal act in which race is used or implied in a manner which would make a reasonable person uncomfortable.”

Jahn, who was deployed to Iraq and Afghanistan three times and injured in 2010, was indignant at his expulsion.

“I will never apologize for the statements I made and will never bow down to the mob mentality of intimidation, bullying or the social media warrior’s gestapo tactics,” he promised.

“I’m embarrassed to represent a hypocritical federation that conducts a complete assault on diversity of thought without even seeking clarifying statements from me in their smear campaign.

“I’m embarrassed at the cowardice of so-called friends who bent over to the mob, knowing very well the quality of my character, in order to preserve their own image.

“The overwhelming support I received from a number of people within the federation, compared to the more than 30 death threats I received from the insignificant rabid key board warriors, was appreciated.

“But I implore you to speak publicly in your support in the future for those bold enough to challenge the status quo and not just privately.

“Nothing I said was racist and I’ve done more for people of color all over this planet at risk of my own life throughout the entirety of my 17-year career than the entire [council] has done cumulatively, and I will continue to do so.”

The 2016 paralympics player made a qualifying remark. “The one point I will clarify is that when I stated that a small percentage of people in our country are responsible for the terrors of slavery hundreds of years ago, of which more than 400,000 men died to abolish under our nation’s flag, I was in no way minimizing the horrors of slavery,” he pointed out.

“I was simply illuminating the misplaced rage and squandered opportunities to bring to light the tens of millions of people who are enslaved today… more so than any point in history.

“[They are] persecuted people who I readily put my life on the line to recover from the predacious dregs who prey on them. I welcome any and all respectful debates void of emotion and will gladly have an open dialogue publicly with anyone who was brave enough to place unwarranted labels on me from the safety of their mobile device.”

Describing itself as “unequivocal in its condemnation of the statements that Mr Jahn made yesterday“, the organization said: “The athlete’s council does not tolerate this type of language and finds it incompatible with membership on the council.

“While the council understands that each person has a right to his or her own opinion, there are certain opinions that go beyond the realm of what is appropriate or acceptable.”