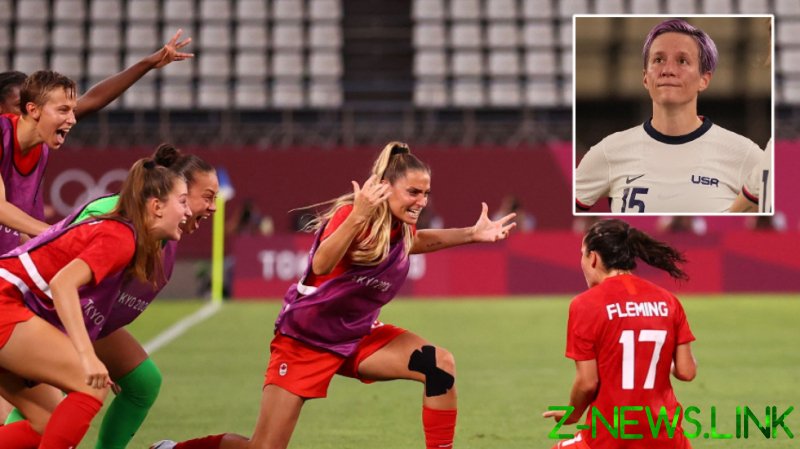 The 1-0 win, secured via a late VAR-awarded penalty by Jessica Fleming 16 minutes from time, represented the first occasion on which Canada had beaten the USWNT in 20 years.

Despite dominating swathes of the game, the USA failed to find the net for the third time in their five matches in Tokyo.

Rapinoe was visibly emotional after the surprise exit, with a photo of her stunned face swiftly doing the rounds on the internet.

“It’s terrible,” the 36-year-old admitted to NBC. “Obviously [it was] not our best game. Not our best tournament. We didn’t have it today.

“Too many errors from us. I felt like the space was there for us. We just couldn’t get into it. We never want to lose to Canada. I don’t think I’ve ever lost to Canada.

“[There’s] still a lot to compete for. That’s what I told the girls. It’s not the color we want but there’s still a medal on the line. It sucks,” Rapinoe added, referencing their upcoming bronze match.

The activist and talisman appeared to point to the squad rotation deployed by head coach Vlatko Andonovski as a possible reason for the World Cup winners’ slump.

“I feel like we haven’t had our joy a little bit,” she said. “It hasn’t flowed for us. it hasn’t been easy. We tried to find it. It’s not for lack of effort. It just didn’t click for us.

“I don’t know if it’s roster rotation but our roster’s deep as hell. We just didn’t have that juice that we normally do.

“[This is not] not even close to our best performances that I’ve seen over the years or even under Vlatko this year.

“We didn’t expect it to be easy. It’s all the best teams in the world and everything’s on the line. We couldn’t unlock it.”

At 36, Rapinoe was also inevitably asked about her future. “I was wondering how quickly that question would come,” she balked. “You guys are trying to put me out to pasture already.”

Rapinoe and her teammates were roasted on social media over their exit, with the winger forming part of a list of players one fan said they didn’t want to see donning the national team’s shirt ever again, while others laughed at her post-match agony.

“You sure do deserve this, Rapinoe – let’s go, Canada,” said a supporter of the USA’s opponents, subverting the “I deserve this” brags the social justice warrior made following her team’s 2019 World Cup win.

“Don’t care, didn’t ask and this is what happens when you start thinking about equal pay instead of football,” came another scathing criticism.

“Rapinoe in the mud. You love to see it,” said one viewer, with a pre-Games headline about whether the Olympics were too easy and too small for the previously all-conquering USWNT also being gleefully dug up.

Team USA will meet Australia or Sweden in the bronze medal match.