Home / WORLD / ‘Everybody has to buy a rifle, damn it!’ Brazilian President Bolsonaro tells his supporters

‘Everybody has to buy a rifle, damn it!’ Brazilian President Bolsonaro tells his supporters 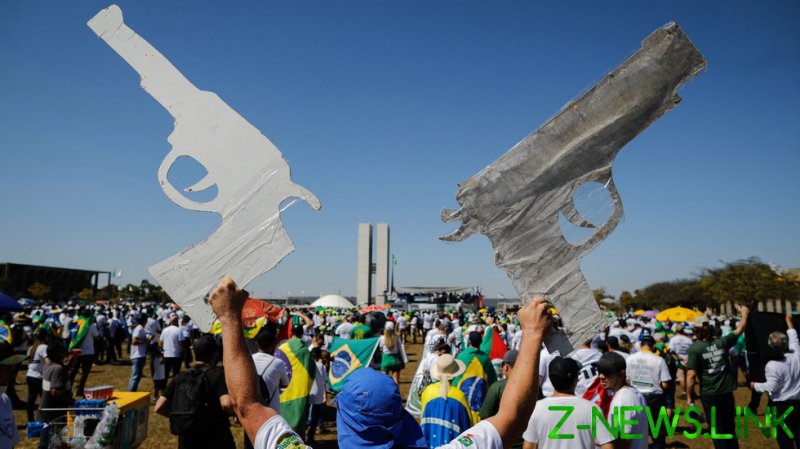 Bolsonaro’s ratings have crumbled amid the Covid-19 pandemic, which has seen Brazil become one of the world’s worst-affected countries with almost 21 million infections and more than 578,000 deaths. A recent poll by XP/Ipespe revealed that only 24% of those surveyed plan to vote for the 66-year-old when he runs for reelection next year, while his leftist opponent, former president Luiz Inacio Lula da Silva, received the support of some 40%.

The rightist president has already threatened to not accept the outcome of the 2022 election, claiming it could be rigged against him due to the alleged vulnerabilities of the country’s purely electronic voting system. He’s now facing an investigation over those statements, which were never backed by any convincing proof.

One group of Brazilians who have been increasingly happy with Bolsonaro since he took office in 2019 are gun enthusiasts, whom he once again addressed on Friday.

“Everybody has to buy a rifle, damn it! Armed people will never be enslaved,” the head of state told a crowd of supporters outside his official residence, the Alvorada Palace.

He acknowledged that weapons “cost a lot,” but insisted that those who oppose guns should stop nagging people who want and can afford to buy them.

During his campaign for office, Bolsonaro vowed to relax Brazil’s gun laws so that citizens could protect themselves from the country’s rampant crime and violence.

And he kept that promise, issuing almost a dozen decrees that made firearms, including semi-automatic assault rifles, more easily available to the public. Some of them, however, were modified by the National Congress.

The president’s latest initiative in February allowed Brazilian citizens to own up to six guns and stripped back federal police and army oversight of firearms ownership. Those with hunting licenses are now free to buy 30 guns, while sports shooters can have as many as 60.

According to data obtained from law enforcement by O Globo newspaper, the number of firearms in private ownership in the country has increased from around 700,000 to over 1.2 million since 2018.