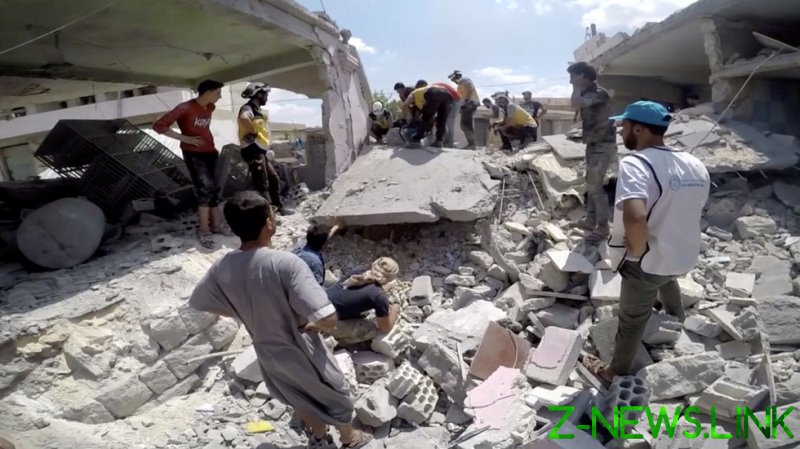 On March 30, Carol Off, the host of As it Happens on Canada’s government-funded CBC, interviewed Montreal-based Farouq Habib, deputy general manager of the White Helmets, about the organization’s operatives and their family members evacuated to Jordan (via Israel, with Canada’s help) nearly three years ago.

At the time, Canada pledged to take in 50 White Helmets and 200 family members. Off’s focus was on 43 evacuees who still haven’t arrived in Canada.

So she asked Habib: “There are some suggestions that the Canadian security believes that these remaining White Helmet people have a connection to the insurgency, that they were militants in some way. Is there evidence of that?”

Habib replied to the positive, “Regarding this particular issue, we don’t deny it at all. It’s declared and we are proud that many of the former fighters who were involved in the beginning in the war…They lay down their arms and they joined the rescue teams to rescue others...”

The Western-funded White Helmets describe themselves as volunteer rescuers, and claim to have “saved more than 100,000 lives.” To prove – or rather, propagandize – their heroism, the group uses professionally-produced videos and social media content about their operations.

Western corporate media has been unblinkingly regurgitating their claims and content, while at the same time smearing journalists who actually went to Syria and interviewed civilians on the White Helmets. From far outside of Syria, it has instead been whitewashing the controversial, militant-linked group.

The White Helmets are not just propaganda, though. I wrote previously about their ties to terrorist and extremist groups. They have been filmed holding weapons alongside terrorists. They were seen at scenes of executions, standing over dead Syrian soldiers, and reportedly cleaning up after an execution in Daraa Governorate.

Journalists have taken testimonies of civilians who had lived under the rule of terrorists, who spoke of how the White Helmets worked alongside terrorists, numbered among them, and denied medical treatment to the people they were supposedly saving.

The White Helmets purport neutrality, but evidence – summarily dismissed by mainstream media as Russian and Syrian “disinformation” – shows they are in fact very partial – partial to militant factions.

Hence, CBC has a vested interest in reading the “hero” script on the White Helmets, instead of actually doing journalism.

With the above in mind, it shouldn’t surprise anyone that Carol Off never veered from her script to at least doubt Habib’s claims that all of the militant-linked White Helmets have really “laid down” their weapons. Not to mention the numerous other questions a responsible journalist could have asked, like:

-Which factions were they members of?

-Do any have blood on their hands?

-Do any currently carry weapons?

-How can you ensure that they have dropped their extremist ways and now are truly impartial and dedicated to helping all Syrian civilians?

Off could have asked any of these questions, or all of them. Instead, she went on:

“Let’s remind people, the White Helmets are believed to have saved tens of thousands of lives. They were nominated for a Nobel Peace Prize. But at the same time, we know that Russian and and Syrian agents have conducted a disinformation smear campaign against the White Helmets. There’s been a lot of propaganda suggesting that they’re not real saviours, that they’re militants. Do you think that the Canadian officials might have been exposed to that propaganda?”

…as if she never heard the part where, just a moment earlier, Habib explicitly bragged that there are “former” militants among the White Helmets – a fact that, at the very least, should arouse suspicion with those responsible for letting them cross Canada’s border.

And just like that, no hard questions asked, the interviewer went on to trumpeting the White Helmets using their own propaganda about the “Russian/Syrian disinformation campaign.”

As for Off’s guest, just how neutral is Farouq al-Habib?

He was a leader of the Homs uprising against the Syrian government and a founder member of the ‘Homs Revolutionary Council.’ When jihadist commander and footballer Abdul Baset al-Sarout died in June 2019, Habib mourned his passing, lamenting his “heroism” and “honour.” Sarout not only held extremist and sectarian views, but was in a terrorist faction and pledged allegiance to ISIS.

It’s not surprising that Off chose not to probe into Habib’s history, just as she chose to ignore his admission of White Helmets’ supposedly-former militant affiliations.

As my own and other journalists’ research on the ground in Syria indicates, many White Helmets members are partial to militant or terrorist factions. They even cheered alongside and for al-Qaeda in Syria. In the rare cases of acknowledging that, media have played it down as just “a few bad apples.”

That’s not the case. Most of the apples are fully rotten. And so is the mainstream reporting.