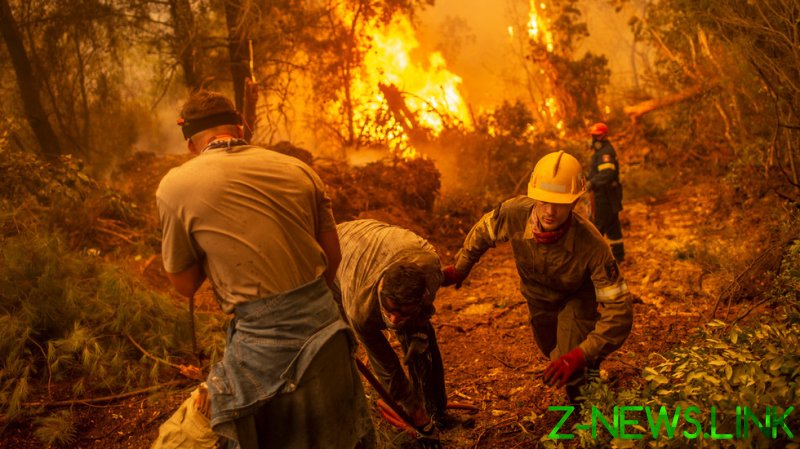 The fire began near the village of Fygia, forcing the evacuation of two neighboring areas. Outlining the scale of the situation, the Greek fire brigade said a deployment of 46 firefighters, 20 fire engines, three airplanes and two helicopters were on site, as high winds have fueled the blaze, presenting challenging conditions for the emergency services.

With the blaze heading in the direction of the tourist village of Marmari, the island’s coastguard is on standby in the event that a further evacuation via sea needs to take place. If the fire continues towards the coastal area, a lifeboat, private boat and two ferries are waiting to transport people to safety.

The forest fire, the second to hit the island in two weeks, comes after civil protection authorities warned on Sunday of a “very high risk” of fire for parts of Greece, with the government blaming a heatwave for the devastation caused.

Separately, in the north of Evia, Greece’s second-largest island, thousands had already been evacuated after a forest fire raged for more than 10 days, destroying farm pastures, homes, businesses and tens of thousands of hectares of land. That wildfire left one firefighter dead and four others in hospital with injuries.

France, Greece, Italy, Spain and Turkey have all suffered from forest fires in recent weeks, as blazes spread around woodland in the Mediterranean region. Elsewhere, Algeria and Bolivia have reported outbreaks of fierce blazes that have damaged significant amounts of forest, as climate experts warn these situations are likely to become more common as global warming worsens.