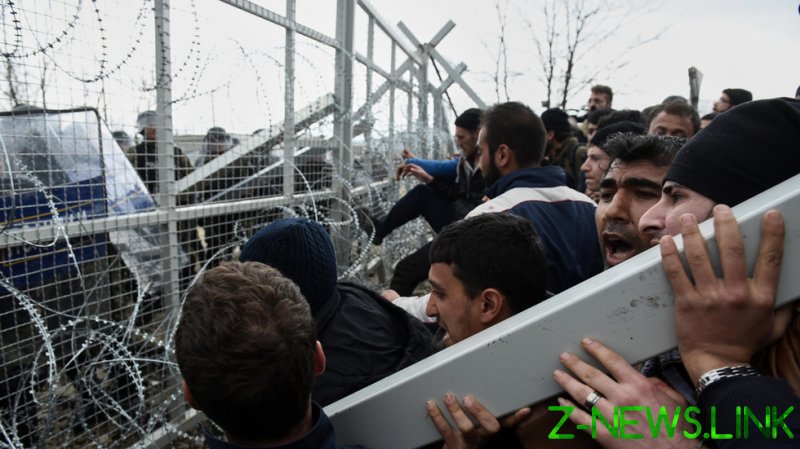 A number of European leaders have called for the erection of walls on the European Union’s external borders to protect the bloc from waves of economic migrants. They are increasingly concerned that following the US withdrawal from Afghanistan, the bloc will suffer a repeat of the migrant crisis of 2015, when an estimated 1.3 million migrants claimed asylum on the continent.

Earlier this month, the interior ministers of Austria, Bulgaria, Cyprus, the Czech Republic, Denmark, Estonia, Greece, Hungary, Lithuania, Latvia, Poland, and Slovakia, wrote to the European Commission asking for funds to be released for the erecting of border walls.

In a letter to European Commission, the interior ministers asserted that “physical barriers appear to be an effective border protection measure that serves the interest of the whole EU, not just member states of first arrival,” and that “this legitimate measure should be additionally and adequately funded from the EU budget as a matter of priority.”

At last week’s European Council summit, a number of leaders broached the subject with the European Commission president, Ursula von der Leyen. Speaking specifically about the number of migrants making their way into the EU from Belarus, Austria’s chancellor, Alexander Schallenberg, said the bloc “should talk about a physical fence or physical border, which is extremely needed as a short-term measure.”

Moreover, the Lithuanian PM, Gitanas Nauseda, said a wall was needed “because nobody knows what will happen tomorrow. Maybe there will be three, four, five thousand migrants staying at the border at the same time or trying to cross the border in different places… We have to be decisive.”

Yet their calls fell on deaf ears last week when von der Leyen told them that EU funds would not be used to build border walls. Indeed, she told the meeting that “there is a longstanding view in the European Commission and in the European Parliament that there will be no funding of barbed wire and walls.” Von der Leyen was supported by the Luxembourg PM, Xavier Bettel who said, “I’d be ashamed to see a fence with a sign ‘Financed by the EU’ on it.”

Now, Luxembourg is one of the smallest countries in the EU and has been relatively sheltered from the effects of the last migrant crisis. Indeed, with a population of around 625,000 people, it is little more than a medium-sized UK city. Moreover, Luxembourg only processed 3,745 asylum applications during the last migrant crisis, and as the country is landlocked and safely hemmed into western Europe, it is not exactly at the coalface of the problem.

Nevertheless, the Luxembourg PM’s views appear to be at one with those of the European Commission. Indeed, the EU, and smaller western countries, seem to be blind to the problems faced by those countries on the peripheries of the bloc.

To me, it makes little sense for the EU, which is fighting on so many fronts, to pick another battle with its increasingly disgruntled members. But this is what it will do if it refuses to fund border walls. I suspect the reason the EU is refusing to pay for the erection of the walls is that it wants to portray itself as a paragon of virtuous liberalism, and being in the business of funding border walls would put a serious dent in that image.

Indeed, when President Donald Trump began erecting a wall on the US southern border, Federica Mogherini, the EU high representative at the time, said that rather than building walls, Europe had “a tradition that we celebrate when walls are brought down.”

The EU is also desperate not to give legitimacy to Hungarian PM Viktor Orban, who has had a wall erected on his country’s southern border. Orban’s barrier is 325 miles (523 km) long and is guarded by 4,500 officers. Orban, however, did not go cap in hand to Brussels and the wall was funded solely by the Hungarian taxpayer. So, where Orban leads, the EU does not want to be seen to follow.

However, do not expect other countries not to follow Orban’s lead, regardless of what the EU says. Greece has already erected a wall on its Turkish border, and the Polish government, which has had its own issues this week with the EU, has announced a commitment to spend €350 million on a wall to prevent migrants illegally entering from Belarus.

I suspect many of these governments are being influenced by what is going on in the US. One of the first acts of the Biden administration was to put a halt to the building of Trump’s border wall. Since then, there has been pandemonium on the southern border, with the Border Patrol making about 1.66 million arrests of migrants crossing the US-Mexico border illegally in the 2021 fiscal year. This is the highest annual number ever recorded

You see, walls may be ugly and deemed illiberal, but they work. They also send out a strong message to would-be economic migrants that the country they are attempting to enter is not a soft touch.

The EU may well regret refusing to fund the building of walls on its borders in the coming months and years, as it is inevitable that a wave of migrants from Afghanistan, in particular, will soon be making their way on to the continent. And it will be those on the peripheries of the bloc that will bear the brunt, not tiny western European countries like Luxembourg.