Home / WORLD / European Commission’s humour Stasi decided ‘right wing memes’ are ‘not funny anymore’… so, what are they going to do about them?

European Commission’s humour Stasi decided ‘right wing memes’ are ‘not funny anymore’… so, what are they going to do about them? 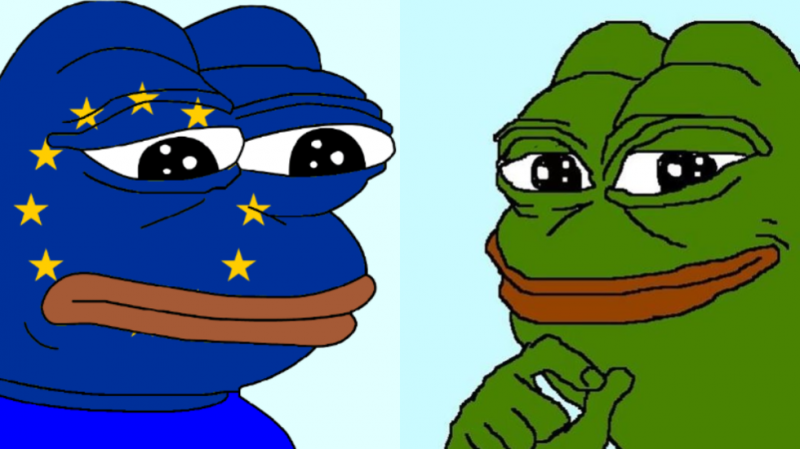 “Humour activates repressed emotions, releases inhibitions, and enables an immediate and spontaneous exchange of feelings,” read a report by the European Commission released in February but widely shared online in recent days. Humor, the report continues, can influence “changes in perspective,” and increase camaraderie within one’s own group.

That’s what makes it dangerous, the report’s authors found. Essentially, they found that right-wing memes are funny, and can therefore seduce viewers into “racist mass violence.”

The report gave three examples of popular internet memes to illustrate this point: the ‘Wojak’ meme, ‘Doge’, and ‘Pepe the Frog’. While racist iterations of these memes have appeared online in recent years, claiming that two-dimensional cartoons are a cause of violence is a tad hyperbolic. Not only are racist and off-color jokes not acts of violence in themselves, but for every Pepe in Nazi regalia shared online, there are hundreds depicting the frog in wholesome situations.

Moreover, these three memes are so long-established and diluted into the mainstream that Kentucky Fried Chicken uses them in advertisements. Is Colonel Sanders a dangerous extremist?

It’s a well-worn cliche online that “the left can’t meme.” Right-wing memes and jokes – which point out observable but uncomfortable realities – resonate with people, while left-wing ideas, heavy on political theory (and some would say denial of reality), fall flat. The European Commission’s report at least seems to recognize this, admitting that sometimes it’s better not to argue with the frog-posters, and instead “strategically ignore exaggerated and misleading statements and visual material – and not take the bait.”

For one thing, the report implies that online racists are organized like other civil society groups, and that their blend of humor and racism is a top-down decision to convert the youth to extremism. “Recent generations of far-right extremists have chosen transgressive humour and (supposed) satire as central weapons in the fight against liberal democracy,” it notes, missing the point that anonymously-shared memes are by their very nature decentralized: there are no leaders on 4Chan.

Yet its authors recommend that the EU bring some “democratic intervention” into the meme war, by helping “young people identify potentially harmful or hateful content,” and by “debunking” this content online, with the help of trusted “social media influencers and progressive communities.”

Such efforts are doomed to fail. The idea of a pedantic lecturer or progressive TikTokker turning the youth away from forbidden humor is laughable. The notion of a Brussels-backed educator or progressive vlogger warning kids about the danger to democracy posed by ‘Catturd’ or ‘StoneToss’ not only makes their memes more appealing, it also exposes the establishment as lunatics and hysterics, not to mention completely out of touch.

When Hillary Clinton tried to warn her supporters about the “white supremacist” connotations of Pepe the Frog in 2016, it didn’t come across as a principled stand against the forces of racism. It came across as an old woman picking a fight with a cartoon frog. That’s exactly what the European Commission has done here, and unsurprisingly, it’s being mocked and ridiculed online.

The report notes that banning so-called “extremists” from social media and “quarantining” their content can limit its reach and influence. Tech companies themselves already use this approach liberally, and as the Commission’s report was being shared over the weekend, several US tech firms announced that they would use a joint “counter-terrorism” database to store material from supposed “white supremacists.” Given that the term “white supremacist” has been used in recent months to describe everyone from Donald Trump’s voters to sports fans waving the Ameican flag, it’s easy to see the database being weaponized against anti-regime humor.

The European Commission stopped short at advocating such heavy-handed tactics, and even cautioned that “deplatforming” racists from social media could reinforce “the narrative that free speech is limited to mainstream elites and potentially rally more support for the far right.”

However, buried at the end of the report is an admission that the EU’s idea of liberal democracy might not be everyone’s cup of tea. The report recommends that officials recognize “that these messages may be particularly attractive to those who feel marginalised by mainstream culture and aspire to achieve a sense of belonging.”

In medieval times, the court jester was one of the few figures allowed to openly criticize the king. Cloaking his critiques in humor, he kept his liege grounded with honest assessment and commentary on his actions. The Eurocrats apparently have no such use for fools, concluding that “these jokes are not funny anymore. The violent fantasies that are woven into these witty narratives may function as serious accelerants of mass violence that need to be countered as such.”