Home / WORLD / Europe must hurry up with Covid-19 health certificates or Apple & Google could get there first, EU Commission president warns

Europe must hurry up with Covid-19 health certificates or Apple & Google could get there first, EU Commission president warns 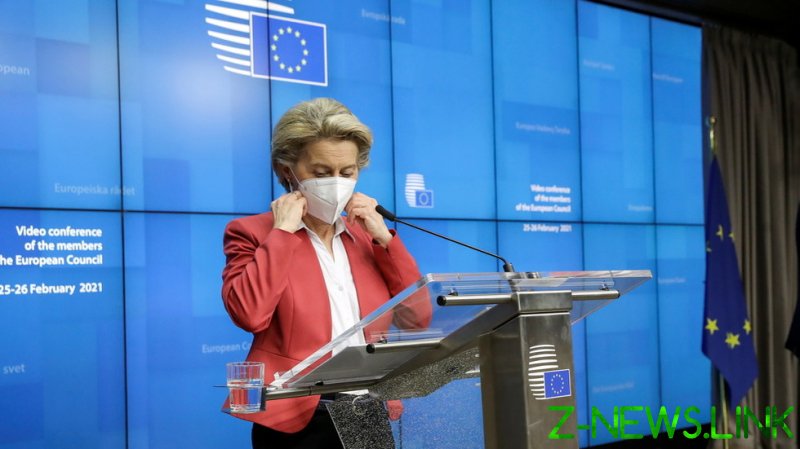 European leaders got together for a large two-day video conference on Thursday, discussing the outstanding issues the bloc faces. The coronavirus situation and the EU’s response to it are among the main topics, with the issue of the proposed health certificates – or passports – remaining highly divisive.

While, in principle, the EU leaders agreed that a universal health certificate of sorts is needed to open up borders and revitalize the coronavirus-battered tourism industry, there’s still no clarity on how exactly they will be implemented.

“We have all agreed that we need vaccine certificates,” German Chancellor Angela Merkel told reporters after the first day of the talks.

Von der Leyen urged the bloc’s leaders to hurry up and produce their vision of the certificates. As an example of how it might be done, she cited Israel’s work in tracking a person’s vaccination history using so-called Green Passes. However, they have reportedly turned out to be easily prone to forgery.

At the same time, she admitted there was no political unity on the exact use of the proposed certificates, or the scientific concerns, as it remains “unclear whether you can transmit the disease even if you are vaccinated.”

“It is important to have a European solution because otherwise others will go into this vacuum,” she told a press briefing.

However, it was not immediately clear what von der Leyen was referring to exactly. Google and Apple rolled out a joint framework dubbed Exposure Notification last April, designed to facilitate digital contact tracing during the pandemic. This week, a Google-backed platform, Global.health, was launched. The project seeks to collect anonymized data on individual cases of Covid-19 from countries around the globe.

An unnamed source told Bloomberg that von der Leyen had apparently got it all wrong, claiming that Apple has never discussed any potential vaccine application with WHO or the EU.