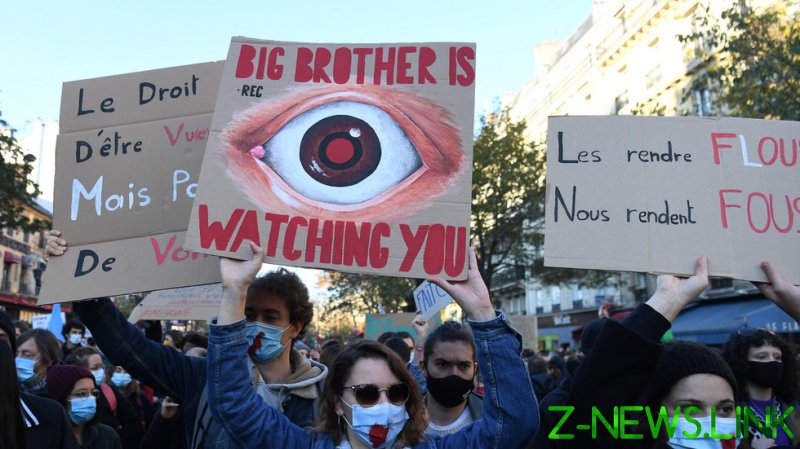 The EU is proposing to regulate AI and facial recognition in the interest of privacy, while pushing ahead with an intrusive scheme that would strongarm citizens into disclosing private medical data through digital certificates.

This week, when logging into the French government’s TousAntiCovid smartphone application – a one-stop shop for everything Covid-19 related, including the latest statistics, news and self-certification forms to be out and about after the 7pm curfew – French citizens discovered a new feature had been quietly added: “My wallet: Your test certificates will be available here,” it reads.

The addition is detailed in the app as an “experiment in progress, only on some flights to Corsica” via Air France and Air Corsica – both of which are controlled in part by the French government through a 29% stake in Air France-KLM, making the state the company’s single largest shareholder.

“To digitize your test certificates and always have them at hand, it’s simple: once the result of your test is available, you will receive a text message with a link and instructions to follow,” according to the new feature. A button below the message can be clicked to activate the user’s camera and scan the QR code of a Covid-19 PCR test.

In an interview earlier this month with CBS News, French President Emmanuel Macron said that “we are building a European certificate to facilitate the travels after these restrictions between the different European countries with testing and vaccination. And the idea indeed is altogether to offer that to the American citizen when they decided to vaccinate or with a PCR test being negative.”

The royal ‘we’ is a reference to the European Union, which has also claimed to be working on a bloc-wide certificate. Hypocritical EU officials also introduced a proposal this week to regulate facial recognition and other artificial intelligence, lest any such technology risk violating personal privacy – kind of like the EU is working on doing with its scheme to have people disclose private medical information to anyone demanding it, under the guise of sanitary nanny statism.

The beta test that has just creeped up on the French government’s anti-Covid app for use on the airline it controls is a little toe dipped into the water of a potentially massive, privacy-breaching tsunami.

At what point do people start to rebel, to send the government the message that state intrusion into the most intimate aspects of their personal life – in this case their medical history – has gone too far? When the government asks for vaccination and antibody certificates to be uploaded? When it expands the program beyond use by Air France to other airlines? When it goes beyond air travel to everyday venues? When a hacker breaches the system and accesses sensitive information? When health insurers start demanding QR codes to Covid-19 related testing in order to reassess the cost of people’s premiums?

French people are known for taking to the streets at the slightest provocation. The now defunct Yellow Vest movement, a casualty of Covid-19 era mass gathering bans, initially ignited over a mere gas tax increase. The creeping sanitary authoritarianism evidenced by the recent Covid app update isn’t as alarming to people as a gas tax because it’s being soft-pedalled, introduced too incrementally to provoke a backlash. No one really cares right now if you need a negative PCR test scanned into your phone to board a plane to Corsica, except the relatively few people going there. And that’s not enough to raise a ruckus.

But the government is deliberately calling it an ‘experiment in progress’ for a reason. It obviously isn’t going to end there. Macron said as much to CBS News. He’s also creating a false dichotomy. Macron is suggesting that the certificates – which he has previously said would be optional (unless you want to leave the house, I guess) – would allow the virus to be controlled, while lifting domestic restrictions and allowing international tourism to resume. The alternative is to be forced to maintain restrictions.

But look, the restrictions will end when we, the people, say they will. And far too many citizens have yet to wake up to that fact.

The insecurity of governments regarding their capacity to contend with a virus, or terrorism, or any other perceived threat, isn’t our personal problem. And it certainly shouldn’t be a reason to invade people’s private lives without a court ordered warrant.

Demanding that everyone provide a Covid test as proof of sanitary ‘innocence’ is radically dystopian. If people want to be vaccinated, that’s their choice. If they don’t, then that’s their choice, too. They may choose to take their chances on catching Covid, and developing natural immunity.

Only each individual is in a position to assess their own resilience based on health status, lifestyle and fitness. The government’s one-size-fits-all approach also risks giving authorities – and others – a false sense of security. For example, US health authorities have discovered that the new ‘double-mutant’ Indian variant of the virus has been found to reduce the effect of vaccine antibodies by 50%. That’s a pretty poor return on investment when you’re asking people to give up their privacy.

The schizophrenic EU and its member states, like France, which constantly claim that personal privacy is a non-negotiable core value, need to pick a lane. Is Europe going to be a technology-enabled sanitary dictatorship? Or are you going to protect us from creeping fascism? Pick one. Because you can’t have both.