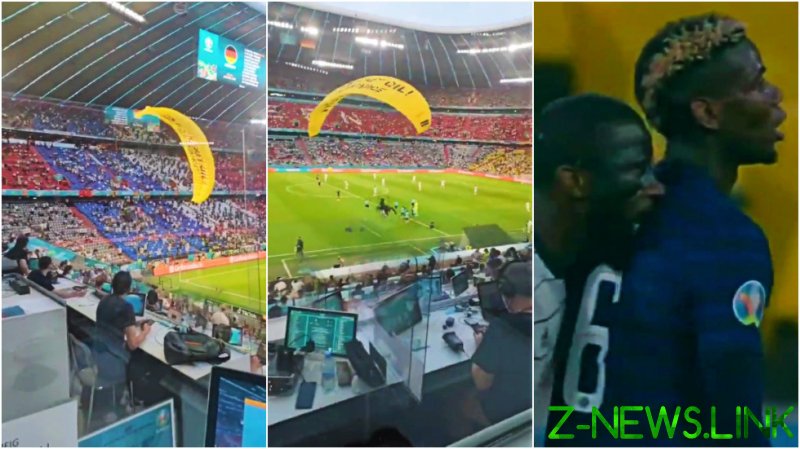 There were fears that the man, who had clearly lost controlled of his direction as he tumbled from the sky in the alarming descent, had been seriously injured or hurt members of the crowd after he plunged towards the main stand before landing on the turf at shocking speed.

His trajectory included a collision with the overhead ‘spider cam’, and his flight path may have been disrupted by the criss-cross mid-air wiring that connects the technology at the Allianz Arena, which is usually home to Bayern Munich.

Worried Chelsea defender Rudiger rushed across to check on the man’s welfare, attempting to help him as he sheepishly took to his feet while looking as if he had miraculously escaped a severe outcome.

In an update from the press box, which had one of the best views in the house of the freak fall due to being well above where the man landed, a well-known French football site said that debris from the apparatus had hit France boss Didier Deschamps and his assistant, Guy Stephan.

Greenpeace later confirmed that they had organized the stunt as a protest against the use of oil by one of the match sponsors – German car manufacturer Volkswagen.

The post from the stadium said that neither Bleus coach was hurt, although it is likely that both would have been shaken just minutes before their side were due to play their titanic opening match at the tournament.

There was a more reassuring sight for the France bench 20 minutes into the game, as Germany defender Mats Hummels sent the ball into his own net to give the World Cup holders the lead.

Just when players, coaching staff and viewers could have been forgiven for suspecting they had seen enough bizarre developments for one evening, a baffling set-to broke out between Germany’s Rudiger and France midfielder Pogba.

In a scene that drew immediate comparisons to Uruguay striker Luis Suarez’s infamous bite at the 2014 World Cup, Champions League winner Rudiger appeared to motion his mouth towards Pogba’s back as they tussled while standing in close proximity to one another.

The Manchester United midfielder gawped in pain and looked over his shoulder as Rudiger grappled with him, although it was not clear whether he was reacting to something his marker had done, nor whether Rudiger had actually bitten him.

The German, who was wearing the kind of face mask that Belgium midfielder Kevin de Bruyne will have to don after Rudiger broke his eye socket in the Champions League final, responded by appearing to put his arms around Pogba and grasp at his chest.

Pundits were as confused by the drama as most fans on social media. “When you see that Pogba reaction, it looked like a bite,” suggested France legend Patrick Vieira on ITV. “I don’t fully understand what he was trying to do there.”

“If he’s bitten him, [Pogba’s] going to flinch there,” reasoned former England striker Ian Wright. “He’s not flinched at all. I don’t know what’s happened.”

Former United hardman Roy Keane described the act as “more of a nibble”. “It wasn’t proper biting, was it?” he asked. “What a silly thing to do.”