Home / WORLD / Euro 2020 final ‘could have been abandoned’, say Met Police chiefs as they defend response to chaotic Wembley scenes

Euro 2020 final ‘could have been abandoned’, say Met Police chiefs as they defend response to chaotic Wembley scenes 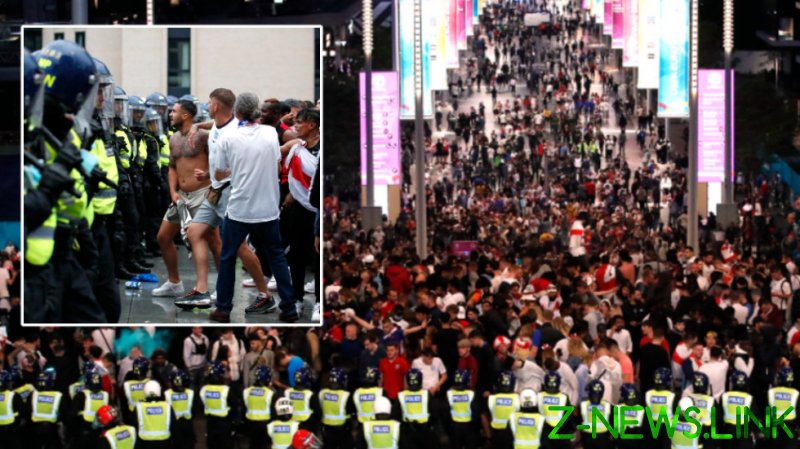 Hordes of ticketless England fans, later described by The FA as “drunken yobs“, stormed the home of English football prior to their side’s penalty shoot-out loss to Italy, with many engaging in violence inside and outside the stadium as well as public drug-taking.

There were also reports that those supporters ‘stole’ seats of from fans who had paid several hundred dollars to attend the game.

Both The FA and UEFA have announced probes into the violence, with European football’s leaders set to sanction England and The FA for the second time in two matches after they were also fined for crowd disturbances during the semifinal encounter with Denmark.

The force has come under fire in some quarters for what was seen as inefficient policing of the crowds, with some anecdotal comparisons suggesting that the policing at regular Premier League games is often entirely more robust than it was at the biggest game to take place on English soil in 55 years.

However, Deputy Assistant Commissioner Jane Connors, of the Metropolitan Police, has sprung to the defence of local cops – and said that without their intervention, the Euro 2020 final may have been abandoned.

“This was meant to be a day of national pride, full of jubilance and celebration,” said Connors in a statement.

“Throughout the course of the day, police officers witnessed disgraceful behaviour both in central London and at Wembley, where a number of people pushed through security cordons or fought with police officers.

“Ahead of the final, police commanders deployed one of the most significant and comprehensive policing plans the Met has ever committed to a football match of this scale. In Wembley, soon into the day it became clear that a high number of fans were arriving without tickets.

“When police commanders recognized this could result in ticketless fans attempting to get into the stadium, they updated security officials at Wembley of this risk. To support the stewarding efforts, further highly-trained public order officers were deployed to Wembley Stadium as a precaution.

“Soon after gates opened, the stewarding and outer security perimeter became overwhelmed and fans began pushing through security checks. I want to praise the quick response by police commanders and those brave officers who confronted these subsequent scenes of disorder and violence.

“I am in no doubt that their swift action prevented any further escalation. Frustratingly, 19 of our officers were injured during the course of Sunday’s policing operation when confronting volatile crowds.

“I do not accept that the policing operation failed and I stand by the difficult decisions made by police officers and the Met’s public order commanders.

“Without their immediate intervention, it is possible that this game could have been abandoned.”

Some speculation has suggested that England may be hit with a stadium ban by UEFA due to the chaotic scenes, while others predict that it could be a final nail in the coffin for England’s joint bid with Ireland to host the 2030 World Cup finals.

The aftershock from the game also continued in the UK Parliament on Wednesday, with UK Prime Minister Boris Johnson announcing plans to ban fans who engage in racist behavior online from attending games in England.