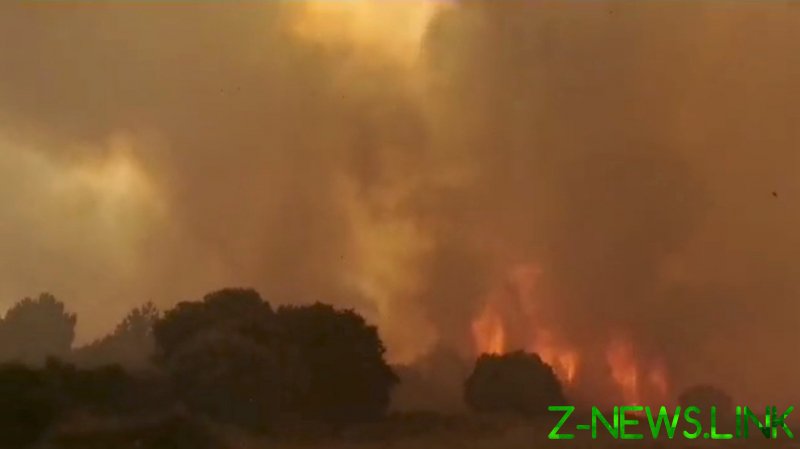 More than 20,000 hectares (50,000 acres) of forest and land have been devastated on Sardinia as wildfires raged through the Montiferru region in the island’s west. The outbreaks also stretched east to the province of Ogliastra.

Videos published on social media showed walls of fire moving along the mountain slopes in Sardinia and closing in on some settlements, as plumes of black smoke blotted out the skies overhead. Firefighting aircraft water-bombed the blaze just meters away from homes, the footage showed.

Other videos showed partly burned buildings with blackened walls and caved-in roofs. Hundreds of local residents and tourists were evacuated across the island as the authorities sought to protect them from the looming catastrophe.

“It’s a disaster,” said Diego Loi, the mayor of Santu Lussurgiu town, after ordering 60 people to evacuate on Sunday. “And we fear the worst,” he added.

Sardinian shepherd Dante Casula, who managed to save his flock of 400 sheep but lost two horses and a shed as well as 180 bales of hay to the blaze, described the fires as “an ordeal, hell”. The region’s governor, Christian Solinas, called it “a disaster without precedent” as he introduced a state of emergency on Sunday.

No deaths or injuries have been reported so far but hundreds of sheep, goats, cows and pigs died in the blaze as they were trapped in barns at farms in the wildfires’ path. On Monday, the fires that raged over the weekend were still raging close to at least 13 Sardinian towns, despite the efforts of at least 11 firefighting aircraft and fire crews on the ground.

The emergency services’ efforts have been hampered by the strong and hot winds still blowing through the island.On Sunday, Italy asked European nations for help tackling the fires and particularly called on them to send specialized firefighting aircraft. In response, the EU agreed to send four Canadair planes to help Italy. Two of them were provided by France and another pair by Greece.

“During these difficult times, we stand together,” Greek Prime Minister Kyriakos Mitsotakis said in a tweet on Monday, as he announced the move.