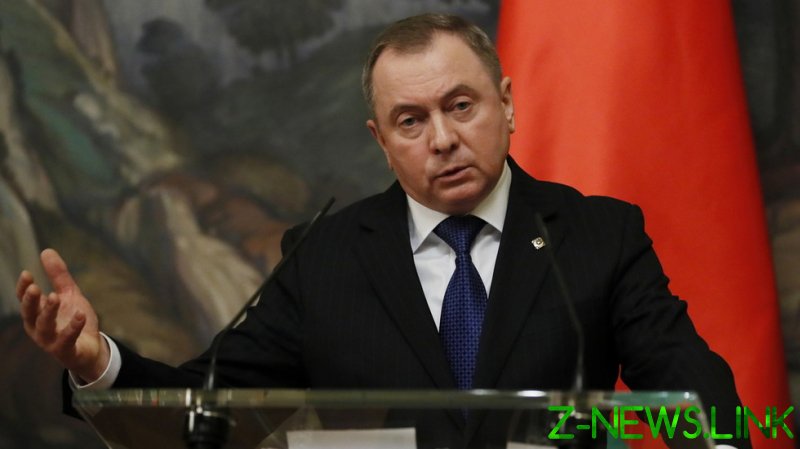 There are only two components left in the EU’s Belarus policies, Belarusian Foreign Minister Vladimir Makei lamented, during an interview on Friday.

“There are financial promises, which they give to our fugitive politicians. They say ‘we’ll give you three billion euros, and Belarus will turn into a democracy at once.’ And the other component is the axe of sanctions,” he alleged, without naming the figures concerned.

Makei said this approach explained why Belarus and the EU were unable to make progress in resolving the ongoing refugee crisis, which each side blames on the other.

The EU and some of its member states, particularly Poland and Lithuania, which have seen a surge in the number of people trying to cross their borders from Belarus, accused Minsk of orchestrating the influx of would-be asylum-seekers. They said Minsk was waging a ‘hybrid war’ against the EU, using people as pawns. Tens of thousands of refugees attempted to cross from Belarus into the EU this year, most coming from conflict-ravaged countries like Iraq and Syria.

Belarus in turn has said increased pressure from the EU left it with a shortage of resources to properly screen international arrivals and forced its border guard to refocus attention on threats like drug smuggling. The EU’s hostility towards Minsk stands in the way of resolving the situation with a comprehensive approach that such a complex problem requires, Belarus argues.

The country was subjected to four rounds of sanctions by the EU, which assused Minsk of mass violations of human rights during and after opposition protests that erupted last year and lasted for 10 months.

While speaking to RT on the border crisis, Makei was particularly critical of Poland, accusing it of using the situation as a distraction from its own domestic policies, which put it at odds with Brussels. The EU is considering withholding funding of Poland from the union’s budget in response to what Brussels considers curbs on democracy and rule of law by the Polish government.

“Poland, in my personal opinion, is a totally xenophobic nation when it comes to migrants, especially migrants from Muslim nations,” Makei blasted. “Current events prove that Poland, as well as some Baltic states, are violating all possible international laws and norms of morality.”

The Belarusian minister also commented on the plans to involve British military engineers in the border stand-off, which has been reported by Poland. Warsaw said the Britons would help the Poles fortify their border against Minsk.

Makei remarked that the UK was in no rush to deploy the Royal Navy to the English Channel in response to record-breaking crossings by migrants there, which topped the 1,000-per-day benchmark this week. Neither did London declare a state of emergency, unlike what Warsaw did due to the situation at its border with Belarus, the official said.

The foreign minister reiterated that his government would respond in the harshest way if the EU imposes a new round of sanctions against Belarus to punish it for the border crisis. He did not comment on remarks made this week by President Alexander Lukashenko, who suggested his country could cut supplies of Russian natural gas to Europe that transit there via its territory, if new EU sanctions come into force.

The Yamal-Europe gas pipeline runs from Russia’s Yamal peninsula to Frankfurt-an-der-Oder in Germany, via Belarus and Poland. Russian gas monopoly Gazprom owns the Belarusian portion of the link.