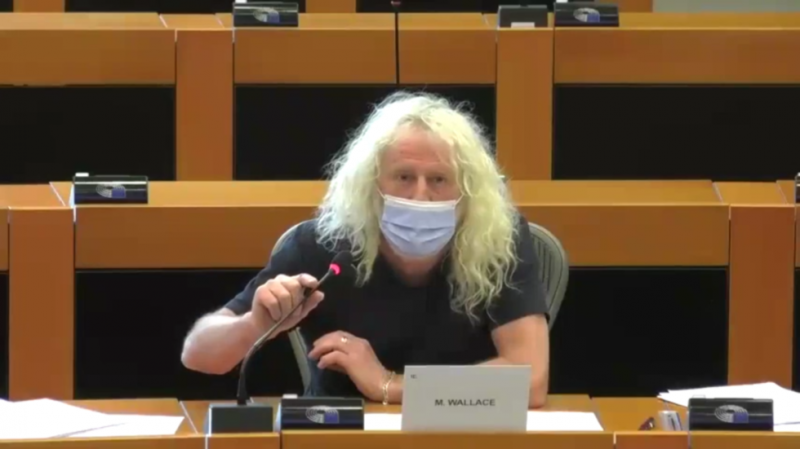 The Organization for the Prohibition of Chemical Weapons has taken an intense interest in Syria’s civil war, and has accused President Bashar Assad of deploying chemical weapons against his own people on several occasions. Its conclusions have twice been used to justify US military action against Syria, and a new OPCW report on Monday found “reasonable grounds” to suspect that a Syrian Army helicopter dropped chemical weapons on the town of Saraqib in 2018.

The OPCW’s reports are good news for Western interventionists, but the organization is not without its critics.

Mick Wallace, an Irish MEP, is among them. When OPCW Director-General Fernando Arias addressed the European Parliament Subcommittee of Security and Defence on Thursday, Wallace accused the OPCW of squashing evidence that Assad may not have been behind one particularly heinous 2018 attack in Douma, near Damascus.

“Why will you not heed calls from renowned international figures…to meet with all the investigators?” Wallace asked Arias. “This problem is not going away. Are you going to investigate all aspects in a transparent manner?”

He is far from a lone crank. Whistleblower testimony and internal documents suggest that the OPCW suppressed “key information about chemical analyses, toxicology consultations, ballistics studies, and witness testimonies” relating to the Douma attack, in order to “favor a preordained conclusion,” in the words of one panel of skeptics. A scientific paper challenging the OPCW’s conclusion was shelved following an outcry from Bellingcat, and one director within the OPCW worried that were the truth to get out, it could aid Russia, an ally of Assad. Furthermore, while multiple whistleblowers have come forward to dispute the OPCW’s findings, more have been “frightened into silence,” one claimed last year.

Wallace also accused Arias of ignoring a “false leak,” made to the BBC and the NATO-affiliated Bellingcat, which he claimed was used to discredit former OPCW Director-General José Bustani, who disagrees with Arias’ blaming of Assad for the Douma attack.

Yet before Arias could respond, subcommittee chairwoman Nathalie Loiseau stepped in to do his job for him. Loiseau apologized to Arias for Wallace’s tough questioning, and accused the Ireland South MEP of peddling “fake news.”

“Is there no freedom of speech being allowed in the European Parliament any more,” Wallace shot back, “today you’re denying me my opinion!”

Wallace’s microphone was then cut, and Arias allowed to speak. However, the OPCW chief did not directly address his questions. Instead he thanked the other MEPs present for their “words of support,” and reiterated his claims that Assad’s government is responsible for “a humanitarian catastrophe of massive proportions.”

Though Loiseau apparently wanted to shield Arias from Wallace’s uncomfortable questions, skepticism within the OPCW goes all the way to the top. Former Director-General Bustani has accused the organization of “potentially fraudulent conduct in the investigative process,” a position that saw him banned from addressing the UN Security Council on the issue last year.

The whistleblower scandal has been mostly ignored by the mainstream media, with only a handful of alternative outlets picking up the story.

From Loiseau’s position though, dissent within the parliament is undesirable ahead of the OPCW’s ‘Conference of the States Parties’ in The Hague next week. Ahead of Wallace’s questioning, Loiseau reminded MEPs that a vote will likely be taken at the conference to suspend Syria’s voting rights within the organization, likely accompanied by other “punitive measures.”