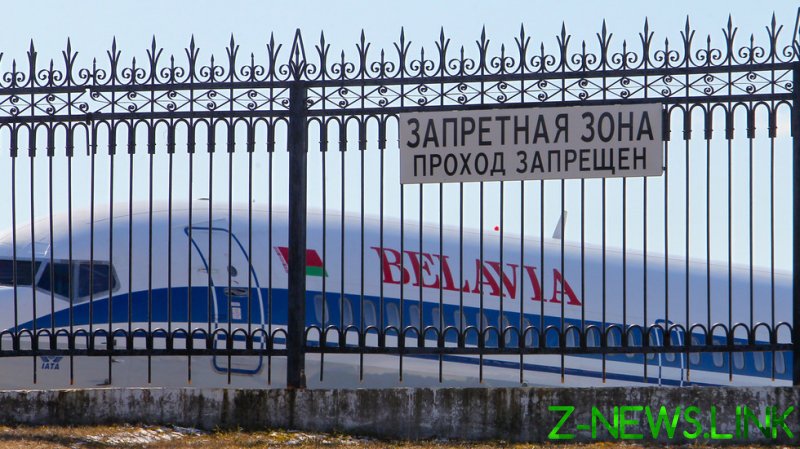 Meeting in Brussels on Monday, the European Council – heads of state or government of all EU members – issued a memo demanding the “immediate release” of Roman Protasevich and Sofia Sapega, two of the passengers detained on Sunday. It also called on the International Civil Aviation Organization to investigate Sunday’s incident, which it described as “unprecedented and unacceptable.”

In addition to urging further sanctions against Belarus, the council called on all EU-based carriers to “avoid overflight” of Belarus, and for member countries to ban Belarus-based carriers from flying over their territory or landing at their airports.

A number of EU-based airlines have already announced they would avoid Belarus, including the Scandinavian SAS, Poland’s LOT, Hungary’s Wizzair, and Germany’s Lufthansa. Ryanair has not yet done so, though its CEO Michael O’Leary called the Sunday incident a “state-sponsored hijacking” and “piracy.”

The Ryanair flight from Greece to Lithuania, with Protasevich and Sapega on board, made an emergency landing in Minsk due to a reported bomb threat – only for the duo to be taken into custody once on the ground.

Protasevich is wanted in Belarus on charges of inciting mass unrest in his former job as editor-in-chief of the Warsaw-based Telegram channel Nexta. He is currently employed by Belamova, an outlet founded by Igor Losik, a consultant for US state-run media RFE/RL. Both outlets are on the list of extremist organizations in Minsk, having sided with protesters who called last year’s presidential election stolen and advocated regime change in Belarus.

Offering a “carrot” to the “stick” of sanctions and airspace ban, European Commission chair Ursula von der Leyen announced on Monday that a €3 billion EU economic and investment package will be “ready to go for Belarus, when it becomes democratic.”

In addition to calling for the release of Protasevich and Sapega, the European Council expressed support for Latvia over the “unjustified” expulsion of its diplomats from Minsk. The Baltic country’s ambassador to Belarus was expelled on Monday in response to Latvian Foreign Minister Edgars Rinkevics and Mayor of Riga Martins Stakis taking down the official flag of Belarus from the Ice Hockey World Championships display and replacing it with the red-and-white banner used by the Belarusian opposition.

The flag was first used by the Belarusian People’s Republic, a short-lived client state of Imperial Germany in the 1918-1919 chaos following the Bolshevik revolution in Russia. It was also used during the Nazi occupation in WWII and once Belarus became independent in 1991, but was replaced in 1995 with the current green-and-red design.