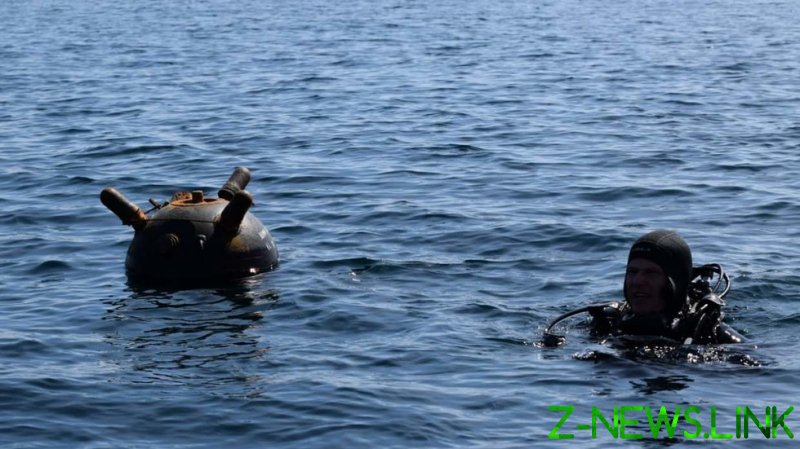 The Romanian military destroyed a stray naval mine discovered on Monday some 39 nautical miles (71km) away from the country’s Black Sea shore.

An object suspected of being a mine was first discovered floating in the country’s waters by a fishing boat, the captain of which alerted the authorities. A minesweeper vessel was dispatched to the area, and it was confirmed it was indeed a mine, the Romanian Defense Ministry said in a statement. It was then examined by a team of divers, who decided to destroy the munition on site with a high-velocity shaped charge.

Images released by the Romanian military show a classic ‘horned death’ naval mine apparently of the small anchored mine type – a Soviet-made munition dating back to the WWII-era.

The mine appeared to have been freshly painted black with white markings and showed little rust. The device had seemingly not been properly armed, however, and the protective caps covering its detonator ‘horns’ had failed to detach, so it had remained intact while adrift.

The latest incident came shortly after another stray naval mine was discovered by the Turkish military close to its maritime border with Bulgaria. A third mine had been scooped up and disposed of by a Turkish SAS team near the Bosphorus Strait on Saturday. 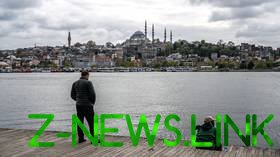 The string of incidents involving stray mines comes amid the ongoing conflict between Russia and Ukraine. The issue was first brought to light a week ago by Russia’s Federal Security Service (FSB), which stated that the Ukrainian military had placed anchor mines along its Black Sea coast to prevent a potential amphibious assault by the Russian Navy. A number of the antique, Soviet-made mines had already detached from their cables, the FSB claimed, warning that the munitions could drift across the Black Sea into the Bosphorus Strait and ultimately into the Mediterranean.

The allegations were disputed by the Ukrainian side, however, which insisted that the mine scare was nothing but Russian disinformation being used as excuse to close off parts of the sea. Some Ukrainian media outlets went even further, claiming the mines had been placed along the country’s coast by Russia itself.