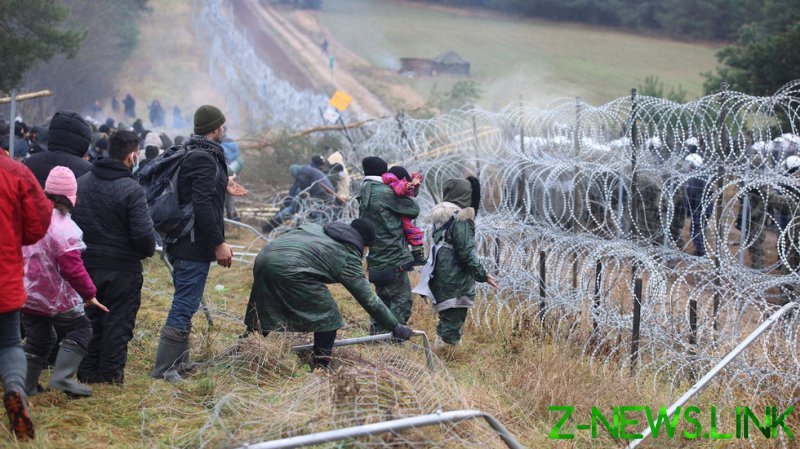 The bold idea was floated on Wednesday by Nils Schmid, the foreign affairs spokesperson for the Social Democrats (SPD) – a political force that garnered the most votes in the September general election and is expected to lead Germany’s new coalition government.

Poland should let in the would-be asylum seekers currently stranded on its frontier with Belarus, Schmid argued on Wednesday, as he spoke to Deutschlandfunk radio station. He added that Warsaw must stop what he described as “illegal pushbacks.”

When asked whether he fears Poland opening its borders will trigger a domino effect, giving false hope to tens of thousands more desperate migrants in Belarus, the German politician parried: “We need to send a clear signal that, first of all, we will treat these people in accordance with humanitarian law, but that they are not all automatically coming into the EU.”

Instead, Schmid said, the EU should tell the would-be asylum seekers “that they will be processed at the border or possibly in a third country.”

The SPD official went on to say that “among the options being considered is talking with neighboring countries such as Ukraine, so that the migrants can be temporarily accommodated and processed there,” the plan being to first allow the people to enter Poland in a “controlled manner” and then to relocate them to nations outside the EU.

It comes as the situation at the Polish-Belarusian border has reached boiling point in recent days, with as many as 4,000 migrants, predominantly from Iraq, Syria, Iran and Afghanistan, trying to force their way through razor-wire barriers and cordons of Polish soldiers and border guards. The refugees have been met with a heavy-handed response, with tear gas and use of force being reported.

Amnesty International, the UNHCR and other rights groups have accused Warsaw of violating the European and international laws on migration. They argue that the migrants have a right to have their asylum applications evaluated in the EU, and that in the meantime, they should be housed in appropriate accommodation, as opposed to the tents with no running water that they are having to live in at present. Several people have reportedly died in the camp.

Poland is pointing the finger at Belarus, claiming that its president, Alexander Lukashenko, is using migrants as leverage in his conflict with the EU, and describes the situation as nothing short of a “hybrid war.” Lukashenko insists that Minsk can no longer effectively manage migrant flows and protect the EU’s external borders from newcomers, as the country is languishing under sweeping Western sanctions.

Ukraine has beefed up security along its border with Belarus, while the country’s ex-foreign minister, Pavel Klimkin, has this week accused Russia of “staging a special operation” involving migrants – a claim that Moscow had earlier dismissed as “downright beyond the pale.” Notably, Klimkin has urged Kiev to secure a guarantee from Brussels that the EU will take any migrants crossing over into Ukrainian territory.