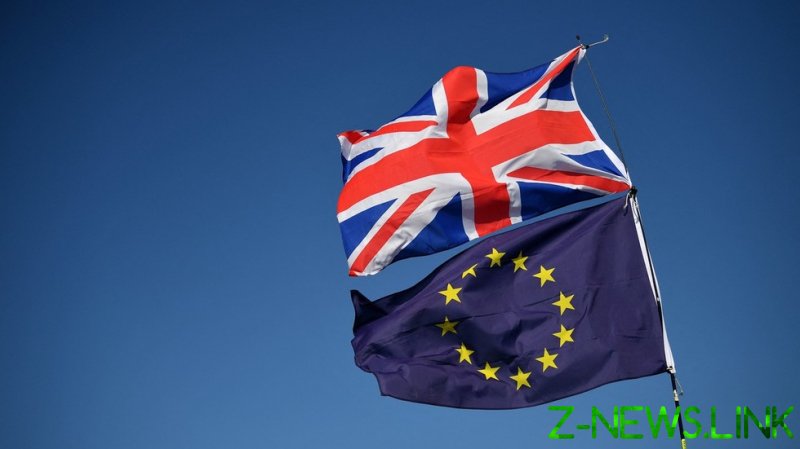 The UK government is ordering local councils across England to fly the European Union flag so Covid-19 recovery funds can be accessed. I know this might sound somewhat bizarre, considering that the UK has already withdrawn from the EU, but Brussels has made the flying of its flag a prerequisite of accessing the cash.

Under the Welcome Back Fund, councils will be provided with £56 million ($77 million) to “support the return to high streets safely and to build back better from the pandemic”. The fund is to be spent on changes to high streets to “promote a safe environment for local trade and tourism, particularly in high streets as their economies reopen.” Thus, to access the cash, the government has had to order councils to fly the EU flag on “every piece of signage, pavement sticker, or temporary public realm adaption” where the fund is used.

This story really sticks in my craw for a number of reasons. The first is because I know that EU funding in the UK has always been a sleight of hand. The way it works is very clever and has managed to fool a good portion of the population. Allow me to explain how the system works: it starts with the UK government handing over its annual membership fee to Brussels. The EU would then return a portion, on the proviso that it had the right to choose how and where the money was spent.

Then, never one to miss a propaganda opportunity, the EU wanted the public to know that the money came from benevolent Brussels. As a result, we had cities and towns all over the UK plastered with signs saying, ‘Thank EU’ and ‘We could not have done it without EU’. My home city of Liverpool was one of the worst. Of course, this was an economic confidence trick. The money was, in fact, that of the British taxpayer. It had been sent to Brussels, then recycled, and returned. Although between 2014 and 2020, the UK received £9.4 billion ($13 billion) in these funds, this paled into insignificance when compared to the overall membership fee.

Many people, however, were fooled. They saw the signs, the slogans, and the EU flags flying over public buildings, and they believed that we should be grateful for all that lovely EU lolly being spent on our shores. Indeed, for years I would often find myself banging my head against a brick wall trying to explain that there was no such thing as EU money, which, of course, there is not. The EU does not raise its own revenue; although it wants to, it doesn’t yet. Instead, the EU takes money from the wealthier member states and buys loyalty across the continent.

English councils are being forced to fly the flag of the EU because the government is accessing a Covid-19 recovery fund that the UK, as a net contributor to the EU budget, has inadvertently paid into for years. Indeed, the UK has every right to access the cash, especially as the EU is now demanding a £41 billion ($56 billion) ‘divorce bill’.

And here is the second reason why this story irks me: to access funds that it is entitled to, the UK has to fly the flag of a foreign power. You have to give the EU its due, it is consistent in its propaganda efforts. Only last week, Brussels tried to have its flag paraded at the opening ceremony of the Olympics. This request was, however, rejected by the International Olympic Committee on the basis that the EU is not a nation-state competing in the Games. Brussels must have brimmed with fury, as the opportunity to beam its flag into the homes of millions of people had been lost.

Thankfully, this is the last time the UK should be subject to this kind of EU propaganda, although for some reason Scottish First Minister Nicola Sturgeon’s SNP government seems to want more. A UK government spokesman stated that “now that we’ve left the EU, this funding will be replaced by the UK Shared Prosperity Fund… reaching around £1.5 billion a year.”

So, from now on, UK taxpayers’ money will be spent in the UK, and on projects chosen by the UK’s elected politicians, and not faceless Brussels bureaucrats. Now that’s democracy for you, and I don’t think anyone could complain about that… except, perhaps, Nicola Sturgeon.