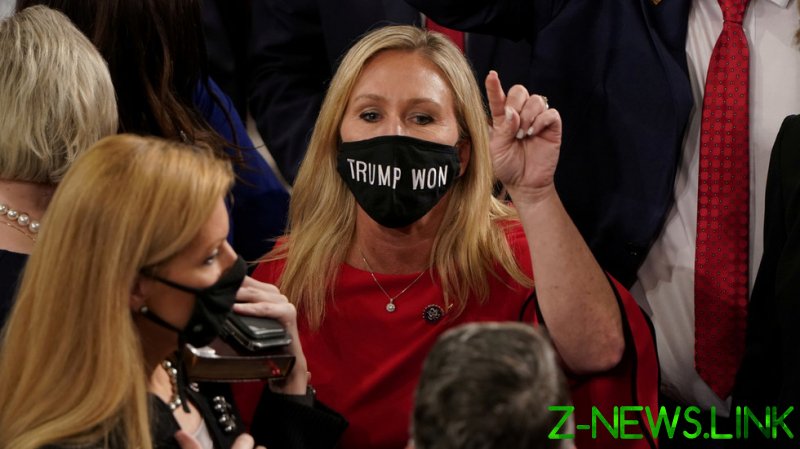 The incident between the two controversial politicians was witnessed by two reporters for the Washington Post, which detailed the event in a story.

Taylor Greene reportedly made a scene, yelling at Ocasio-Cortez that left-leaning groups such as Black Lives Matter and Antifa were “terrorists.” The Republican shouted that Ocasio-Cortez didn’t “care about the American people,” and AOC walked away from the situation, having thrown up her hands in frustration.

A spokeswoman for Ocasio-Cortez confirmed the incident to the Post and said the congresswoman hoped House leadership and the House sergeant at arms would take action and “make Congress a safe, civil place for all Members and staff.”

Taylor Greene mocked the New York Democrat on Thursday for wanting security to intervene, and blasted her as a “fraud” and a “hypocrite.”

Speaking to reporters after the altercation, she also branded Ocasio-Cortez a “chicken” who could not defend her policy positions to the public. Taylor Greene has offered to debate the Democrat multiple times on the Green New Deal, but Ocasio-Cortez has not yet taken her up on the offer.

House Speaker Nancy Pelosi, commenting on the incident in a press conference, said Taylor Greene may have committed an ethics violation.

“This is beneath the dignity of a person serving in the Congress of the United States and is a cause for trauma and fear among members, especially on the heels of an insurrection – one which the minority in the committee yesterday denied ever happened,” she told reporters, adding that action regarding the “verbal assault” could “rise to the level of an ethics complaint.”

Ocasio-Cortez’s supporters on social media praised her handling of the situation, applauding her for walking away from the congresswoman.

This is not Taylor Greene’s first time dramatically and publicly confronting political adversaries, as many have noted in their criticisms online.

She has previously confronted Ocasio-Cortez about the potential Green New Deal debate. And Rep. Cori Bush (D-Missouri) moved her office after she said she was “berated” by Taylor Greene and her staff earlier this year, though the Georgia representative claims the situation was the other way around and Bush berated her. Bush eventually moved her office away from Taylor Greene’s for her team’s “safety” and noted that the Republican was maskless when she confronted her.

Taylor Greene made even more waves when she yelled at Parkland survivor and gun control advocate David Hogg in 2019, when they were in Washington DC at the same time. She yelled at him and the group he was with multiple times, getting no real response, with students with Hogg chanting, “Enough is enough.”

The Georgia Republican would go on to call Hogg, who was 18 at the time, an “idiot.”

After numerous social media users drew comparisons between the most recent Ocasio-Cortez encounter and Hogg’s experience, the activist took to Twitter and said Taylor Greene “should absolutely not have access to guns.”