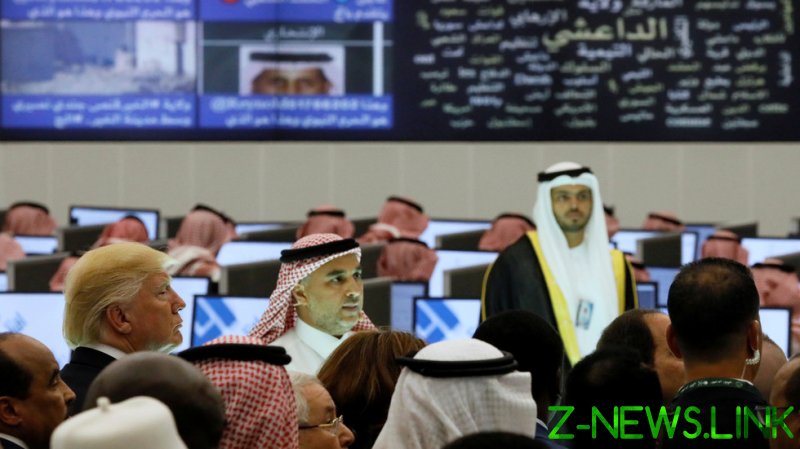 Wallowing in schadenfreude as it describes the purported IS (formerly ISIS) terrorist organization’s sympathizers who’ve supposedly found a home on the pro-Trump social network that recently sprung up following the ex-president’s exile from Twitter, Politico notes that Gettr’s “‘free speech’ policy” will “purportedly… allow users to fully express themselves without the censorship of tech giants.”

Which sounds great until the “MAGA exodus to fringe social networks that champion unfettered speech” catches the “attention of supporters of Islamic State and other jihadist groups,” the outlet continues, citing “extremism experts.”

IS supposedly had their eyes on Gettr from the platform’s July 1 beginnings, “urging their followers” to begin signing up right away – “in part to take the jihadi fight directly to MAGA nation.”

“If this app reaches the expected success, which is mostly probable, it should be adopted by followers and occupied in order to regain the glory of Twitter, may God prevail,” one purported IS account wrote just five days after Gettr’s launch. The references to Twitter and Facebook go unremarked-upon by Politico, which instead appears to take the rather silly notion of Islamist terrorists expressing reverence for American social media platforms at face value.

Jason Miller, the former Trump spokesperson who founded Gettr, told Politico that IS had merely chosen to target his platform because Trump had reduced it to a shadow of its fearsome former self on the battlefield in Syria.

“The only ISIS members still alive are keyboard warriors hiding in caves and eating dirt cookies,” he told the outlet.

Politico seizes the opportunity to note that after “the largest social networks” had similarly vanquished IS – online, rather than in Syria – they began working together with the Global Internet Forum to Counter Terrorism (GIFCT), a controversial entity that serves as a centralized clearing-house to track, catalog, and remove terrorist recruiting material, memes, symbols, and other material that surfaces across platforms, allowing social networks to more quickly offload such content.

Gettr “has yet to sign up” for GIFCT, Politico notes, without mentioning that one must undergo a complex approval process before one can join the group, or that it goes without saying that Gettr is profoundly unlikely to be embraced by an ‘anti-extremism’ group when its inspiration, Trump himself, was booted from all the major social networks for supposedly inspiring “extremism” himself.

Politico makes a point of demonstrating how Gettr supposedly violates its own terms of service, pointing out that that a whopping four days after they “submitted several requests for comment to Gettr, many of these accounts and videos are still up.”

There are no links provided to the offending videos and accounts, and one must merely take Politico at its word that the content in question – which includes not just the profiles of IS sympathizers but also “promotion of the Proud Boys white supremacist movement,” a right-wing “western chauvinist” organization led by an FBI informant and other “mostly right-wing content” left to the imagination – is as vile as we are told.

Politico and the GIFCT aren’t the only outfits to discover what they believe is a broad – however unlikely – overlap in tactics and personnel between potential Islamist recruits and “white supremacism,” either. Google’s research arm Jigsaw, which attempts to “redirect” internet users with an apparent interest in jihadi terrorism by sending their searches to more wholesome destinations – and their personal information to law enforcement – has expanded its focus from extremism to white supremacy, online toxicity and disinformation.

Such an ignominious end for Miller’s social network would set Gettr following in the footsteps of fellow pro-Trump social media networks Parler and Gab, both of which were bounced from the Apple and Google app stores after they were spuriously linked to extremism in recent years. Gab was blamed for the Pittsburgh synagogue shooting in 2018 even though the shooter also kept a profile on Twitter and Instagram, while Parler was fingered as the fertile soil in which the January 6 Capitol “insurrection” supposedly took root, even though the vast majority of participants actually planned their activities out on Twitter, Instagram, and Facebook.

Such accusations are not harmless. GIFCT and a more ominous partnership between pro-censorship anti-bigotry group the Anti-Defamation League and PayPal have made it clear their aim is destroying the “financing networks” that make what they insist are networks of “online hate” possible, rendering these groups – which insist they are innocent of bigotry or any such offenses – unable to support themselves.