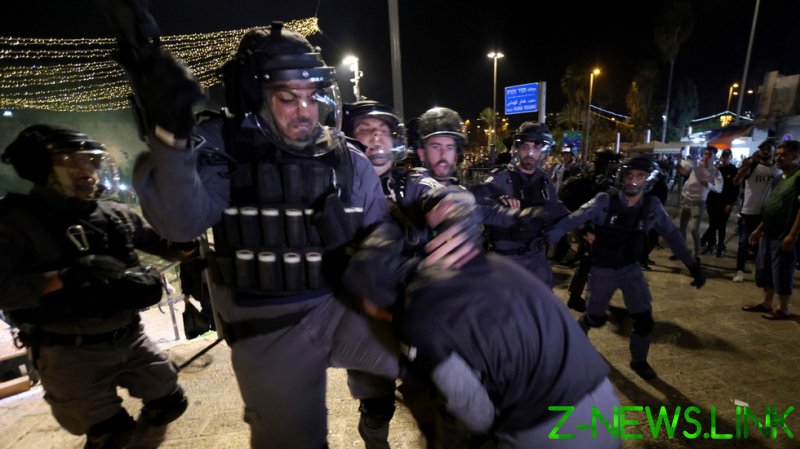 On Friday, Israeli police used rubber bullets, tear gas and stun grenades on worshippers at Al-Aqsa mosque after the crowd began throwing chairs, rocks and shoes at them. More than 200 Palestinians were reportedly injured across Jerusalem during skirmishes with security forces. Dozens of people were hospitalized and seventeen officers were hurt in the clashes. The unrest continued into the weekend, with the Palestine Red Crescent reporting early Sunday that dozens of more people had been injured, including a one-year-old.

In a speech on Saturday, Erdogan said that the violence was an “attack on all Muslims” and called on the United Nations to put an end to the Palestinians’ “persecution.”

“Israel, the cruel terrorist state, attacks the Muslims in Jerusalem – whose only concern is to protect their homes… and their sacred values – in a savage manner devoid of ethics,” Erdogan said, Turkish media reported.

The unrest comes amid growing anger over the planned forced eviction of several Palestinian families living on land inside annexed sections of the occupied Palestinian territories. The land has been claimed by Israeli settlers. Israel’s Supreme Court will hold a hearing on the divisive legal dispute on Monday.

In his remarks, Erdogan called for the evictions to be halted, warning that Turkey would “do everything we can to ensure the cruel are sentenced to the fate they deserve” if the Palestinian families are pushed out of their homes.

Israeli Prime Minister Benjamin Netanyahu has signaled that his government intends to move forward with housing Israeli settlers in the occupied territory. On Sunday, he said that he “firmly rejects” international pressure on Israel to call off the evictions.

Erdogan has used similar rhetoric in previous comments about Israel. In April 2018, he described Netanyahu as an “occupier” and “terrorist” after Israeli forces opened fire on Palestinian protesters near Gaza Strip’s eastern border, killing scores of people.