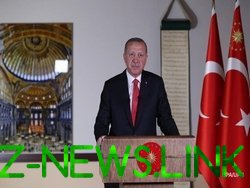 The Hagia Sophia will continue to protect, as the object of cultural heritage, said the President of Turkey.

Turkish authorities by changing the status of Hagia Sophia into a mosque, Hagia Sophia, corrected admitted in 1935, a historical mistake, said President Recep Tayyip Erdogan. About it, on Tuesday, July 14, according to RIA Novosti.

“We fulfilled the will of 83 million citizens of Turkey. In 1934 it was turned into a Museum. Now we correct this mistake, it is our sovereign right,” the President added.

Erdogan stressed that the Hagia Sophia was converted into a mosque out of the Church, and from the Museum.

“We in any case there is no hostility to other religions – on the contrary, there is respect. We have 4-5 times more religious buildings for non-Muslims than in Europe for Muslims,” concluded the Turkish President, noting that authorities continue to monitor the safety of Hagia Sophia “like a treasure”.

The status of Hagia Sophia as a state Museum was approved by the government decision of November 24, 1934, signed by the founder of the Turkish Republic by Mustafa Kemal Ataturk.

The Turkish Council of state on 10 July this year overturned the decision of the government on the award of the Hagia Sophia and the status of the Museum. Then Erdogan signed a decree according to which in Ayia Sofia will resume Muslim worship.

Hagia Sophia, built in the VI century and is a monument of Byzantine architecture, in 1985 he was included in the world heritage of UNESCO.

A number of European countries have condemned the decision. They considered this step a challenge to the world.