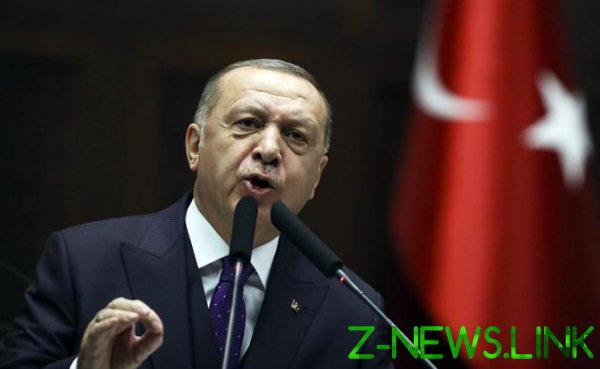 Turkish President Recep Tayyip Erdogan at a meeting with deputies in Istanbul said that during a telephone conversation with his Russian counterpart Vladimir Putin and asked him to leave the path of the Turkish military in Syria. “I openly, Putin asked: “What are you doing in Idlib? If you want to create a military base, then create, but out of the way of Turkey”, — quotes its words Agency Anadolu. According to him, Ankara intends to demonstrate to the regime of President Bashar al-Assad and his supporters of their resolve.

Official Moscow has not yet commented on Erdogan’s statement. The first comments come from the State Duma. According to the Deputy Chairman of the Committee on international Affairs Dmitry Novikov, the Turkish authorities no authority to determine the fate of Syria.

According to him, currently the government of Turkey is trying to obtain a monopoly of intervention in the domestic Affairs of Syria and spontaneously start to dictate their will to other States. However, such actions are absolutely unacceptable.

Telephone Conversation Putin and Erdogan took place on February 28. It is reported that during the meeting they discussed the implementation of the Russian-Turkish agreement on Idlib and the importance of coordination between countries through military channels. In addition, the leaders discussed issues of combating terrorism and emphasized the need for additional measures to normalize the situation in the North-West of Syria.

On the same day the Turkish leader spoke by phone with US President Donald trump and German Chancellor Angela Merkel and informed them about the intention of the Ankara’s “clear from the elements of the regime of Bashar al-Assad” zone in Idlib. He had previously made a large-scale military offensive.

Another escalation in Idlib happened on February 27 when in the attacks of the government troops, supported by the Russian VKS, killing 36 of the Turkish military that are in combat formations of fighters. Various Turkish politicians have threatened revenge, and reported on the readiness for war with Russia. The Turkish leader has shown more restrained, stressing that Ankara is taking part in a military conflict in Syria, not seeking to conquer new lands or appropriation of oil fields. All he wants Turkey, he said, is to create a security zone in Idlib and thereby to defend its borders. According to him, in Syria, the boss 40 000-60 000 armed and well-trained terrorists, however, neither Russia nor the United States, he said, do nothing to stop them. In Russia, in turn, considered terrorists by Ankara supported the rebels.

With a side of Ankara can understand — Syria was once part of the Ottoman Empire and still is in the zone of interests of Turkey, particularly areas of the North-West, inhabited mainly by Turkomans. In Russia like to say that” do not throw their Russian”. But the Turks can claim the same? The right thing to do, meddling in other people’s business? It is clear that the law is on our side because Russia is acting under the mandate of the official of the government, and Turkey is a occupier. But we must understand that Turkey will never back down from protecting their interests, which for them is much more important than our interests in Syria. Would it be possible to negotiate so that both sides were satisfied? Can we consider Erdogan’s statement as an ultimatum? And whether the situation is a deadlock?

— Then you need to understand what is a deadlock, — says the chief editor of the magazine “Window to Europe” Dmitry Kondrashov.

— If you do not consider Syria as a sovereign state, and as an area of geopolitical confrontation between world and regional players, then the situation is at the point after which the return to any agreements of external forces on the fate of Syria is unlikely. If we recognize Syria as a state and as an independent entity in international Affairs, on the contrary, the situation in Idlib getting out of the deadlock and committed to the only possible solution — the full restoration of Syrian sovereignty over the territory. We see that the Syrian army has reached a level of combat capability, which allows you to achieve this if the country is not facing a direct external aggression.

“SP”: — What does it mean to leave the path? Throw Assad? What Erdogan is counting? And what he wants to in Syria?

— Such rhetoric rolls back all the efforts that our country has made to restore relations after the aggressive actions of the Turks against our armed – forces and our diplomats. Throw Assad? But we are there at the invitation of the legitimate government of the country, and not unknown people on an invitation which tries to justify their aggression against Syria, the Turkish leader. It is not a conversation between heads of state, and a vulgar attempt to intimidate not only Russia, but all around. But such intimidation and attempts conversation “on concepts” as well as the recent actions of Turkey, only the withdrawal of the Turkish leader from among those who have any cases. Erdogan has made himself and his country a pariah, which no well-wisher. Seriously, all the desires of Erdogan are the bluff on which it is due to the desperate position in which he found himself because of the unreasonable internal and external ambitions to create a Turkish geopolitical project in the framework of the Ottoman heritage.

“SP”: — According to Erdogan, he asked Putin wants Moscow to a military base in Idlib, and like even hinted that he didn’t mind. And whether it is necessary to Moscow?

— As far as I remember we already have two military bases in Syria, and Erdogan’s permission for placing them there we did not need. In this regard, I would like to note that the main supply of our military group in Syria is not through the Turkish Straits, and through Gibraltar. So that even the threat ceiling for Russia of the Bosphorus are a bluff.

“SP”: — What do you think Putin replied? Where are the limits beyond which it cannot go?

— It’s hard to imagine Vladimir Putin, leading the conversation in a tone which took the Turkish leader, it’s absolutely not his style, so I think that the participation of our President in this dialogue has been reduced to maximize the correct wording. Response will be carried out on the basis of the actual actions to be taken by Turkey and the real action, in this case, I think the most rigid and effective. And what about the borders… we live in a world where no one can define any border. Just five years ago, the return of the cradle of Russian Orthodoxy of the Crimea was beyond all existing boundaries. And given the totally inadequate policy of Turkey in relation, not only to us but also to other leading players of the international community, the limits in respect of Turkey is very clear.

“SP”: — whether the withdrawal of Turkey from Syria in the theory? Will Damascus ever to regain control of Idlib?

— The departure of Turkey from Syria is inevitable, and in this situation there is a chance that Damascus would provide control over the whole territory of Syria in the foreseeable future.

— Yes, that the demands of Turkey and Russia’s proposals are too different, Turkey wants to expand opposition-controlled areas and Russia, on the contrary, suggests that Turkey is actually to move away from the current position and to be content with only a border area, -the head of the Islamic research centre of the Institute of innovative development Kirill Semenov.

— Ankara is trying by force to return the position previously held by the opposition at the M5 and at the same time to stop the advance of Assad on the M4. Therefore, Erdogan believes that Russia should not interfere with Turkey to fight against Assad that would allow to achieve the above objectives.

“SP”: — What should be responsible for it, Putin?

Putin, as I understand it, goes in principle from any answers in Idlib, and provokes the escalation as Russian negotiators are unable to make any substantial changes in Russia’s approach to Idlib, not having received a clear signal from the Kremlin. Unfortunately, the unwinding of the information campaign at Idlib in the Russian media has gone too far, a little earlier, perhaps Moscow could without losing face to get out of the campaign in Idlib, signed a deal with Ankara. Russia, in the end, did not assume the obligation to return the entire Assad Syria “until the last inch,” and only to combat terrorism. Once in Idlib were deployed Turkish troops this task — struggle with the “Nusra*” it could be entirely entrusted to them. Previously on such a scale Turkish military presence in Idlib had, which allowed us to “Nusra” feel free, now the Turkish military presence covers almost all areas of Idlib. Russia its objectives in Syria and further involvement in support of Assad may reset the main and foreign dividends that Russia has benefited from Syria, namely Russian-Turkish partnership.

— The impasse is not the situation in Idlib, in the dead end turned out to be Erdogan personally, — said the head of the Expert Council of the Foundation for strategic development Igor Shatrov.

— He drives into the dead end yourself by using the operation in Syria to resolve their internal political problems. Nothing yet visible, tangible to the voters, but the war in Syria, he can not offer. But in Syria, Turkey’s interests (within the meaning of these interests, Erdogan, of course) faced with the interests of Russia. And Russia really need Turkey, no less. Dialogue with Putin is also used as a tool to maintain the rating, and economic projects with Russia is that it is also possible to “sell” to the electorate. And unlike war, these projects in the future will have a significant positive impact on the Turkish economy. And gas pipeline and nuclear power plant construction projects in Russia, which implement the Turkish company, I will not mention income from tourism.

Russia and Turkey have experienced in the recent past, the period of cooling of relations, when the Turks shot down a Russian plane. What it led to? What brought the focus solely on the West? I recall the chronology. 24 Nov 2015 was shot down by Russian su-24, and the relations between Russia and Turkey was on the verge of rupture. But hopes of Ankara to support the West did not materialize. Turkey appealed for help to NATO, but the Alliance decided not to intervene in Turkish-Russian conflict. Moreover, on July 15-16, 2016 in Turkey there was a military coup attempt, which, as it turned out, was a West. According to some, it is the information that the Russian intelligence services helped Erdogan break the plans of the conspirators. So who is Turkey a reliable partner?