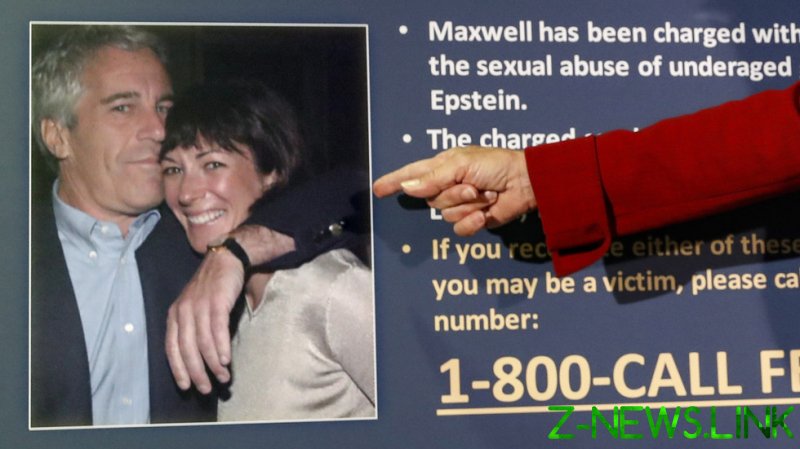 Prince Andrew’s ex-girlfriend Lady Victoria Hervey has called Jeffrey Epstein and Ghislaine Maxwell a “double act”, crediting the latter with luring women for the billionaire pedophile, and saying she was duped by the pair.

“Jeffrey was really the frontman and Ghislaine was the accomplice,” said Hervey. “It was kind of like a Batman and Robin, and they were a double act. I don’t think Jeffrey could have done any of it without Ghislaine.”

Hervey spoke to British channel ITV for its documentary ‘Ghislaine, Prince Andrew and the Paedophile’, due to broadcast on Tuesday night. The Daily Mail was given a preview of the documentary earlier that day and published Hervey’s quotes.

The daughter of the 6th Marquess of Bristol, Hervey was a well-known socialite in London in the early 2000s, and Prince Andrew was one of several celebrities she dated over the years. She told ITV that she rubbed shoulders with Epstein and Maxwell at parties, but never had any idea what the pair were up to behind the scenes.

However, she said that herself and Maxwell would approach other women at these parties to set them up with Epstein and his friends.

“I think [Epstein] just kind of sat back and sort of waited for her to sort of go fishing and go find however many girls were needed, you know, to entertain his friends,” she said. “I think I was pretty much used as bait. You know, looking back at it, I was really young and naïve, and she’s entertaining these big businessmen. So I didn’t realize it of course at the time. But looking back…”

“It wouldn’t have worked with him on his own,” she continued, claiming that “it was a lot easier for [Maxwell] to approach other women, being a female.”

Despite describing Maxwell as instrumental in Epstein’s activities, Hervey told ITV in a separate interview that she sees the disgraced socialite as “a victim that then became the accomplice,” as Maxwell went from being Epstein’s girlfriend to his partner in recruiting minors for the late pedophile to abuse.

Maxwell was convicted last month on five counts of sex trafficking and conspiracy, and could be sentenced to more than 60 years in prison. Some of her victims were as young as 14. Epstein died in a Manhattan prison cell in 2019 before he could answer to charges of sexually abusing minors, with his death ruled a suicide.

With Epstein dead and Maxwell awaiting sentencing, attention has turned to Prince Andrew, who is facing a civil lawsuit from Virginia Giuffre, one of Epstein’s alleged victims. Giuffre claims that she was trafficked to Andrew for sex on three occasions, at least once when she was 17 years old.

Hervey did not comment on the allegations against the royal, who may have to testify in his own defense, or attempt to reach a settlement with Giuffre. Andrew, who is also accused in the ITV documentary of having an “intimate relationship” with Maxwell, was stripped of his honorary military titles by the Crown last week.