Home / WORLD / Epstein and Maxwell told victim they would feed her to ALLIGATORS, & raped her in front of her 8-year-old son, new lawsuit claims

Epstein and Maxwell told victim they would feed her to ALLIGATORS, & raped her in front of her 8-year-old son, new lawsuit claims 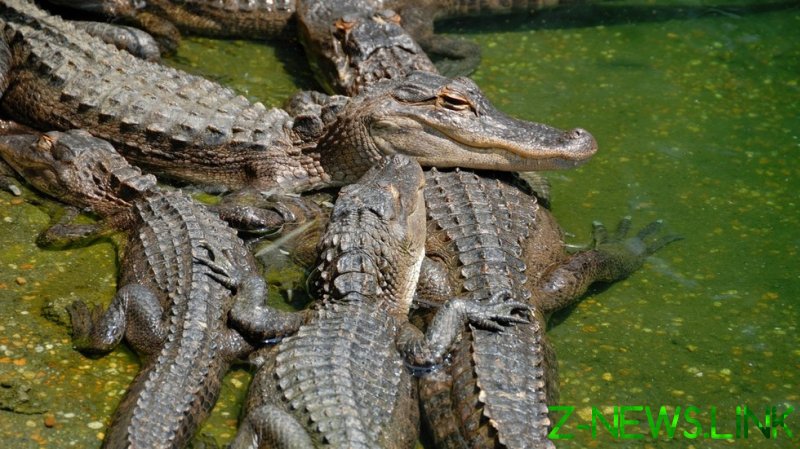 The Turkish real estate broker has sued Epstein’s estate over the bizarre torture she claims to have suffered under his confinement, according to a lawsuit filed last week and made public on Tuesday by the Miami Herald.

Named only as Jane Doe in the legal papers, she was introduced to Epstein and his alleged partner-in-crime, Ghislaine Maxwell, by her employer, apparently a close friend of Epstein’s who told her the financier needed a rental property – quickly, cash paid, no questions asked. When she was successful, the infamous sex offender suggested she might work for him on a more permanent basis, plying her with expensive gifts and the promise of “highly placed employment” for herself and her then-husband.

Unfortunately, the broker was rather too successful, and after six months of “persistent efforts” on the part of Maxwell, who’d stolen her passport for “safekeeping” purposes and stashed it in a lockbox somewhere in his sprawling Palm Beach estate, she agreed to come back and do some more work for Epstein, this time being asked to cut his hair.

The job offer was a trap. Doe arrived at the predator’s home to find a nude Epstein and Maxwell serving as a willing accomplice, and the pair proceeded to sexually assault her, the lawsuit claims. Brandishing Epstein’s guns for intimidation purposes, the pair threatened her with a prostitution arrest (Maxwell had paid her $200 for the haircut, after all). She was also threatened with deportation and having her son taken away.

Topping off the horrific series of threats, Doe was taken for a ride in Epstein and Maxwell’s car. They stopped by her home to pick up her son, then pulled over to the roadside, where the predatory pair pointed out a group of alligators in the water. According to the lawsuit, Epstein “told [Doe] in explicit detail that – as had happened to other women in the past, according to the pair – she would end up in this body of water and be devoured, should she ever reveal what Epstein had done to her.”

Doe was further subjected to several days of rape by Epstein and Maxwell in front of her son at a hotel in Naples, the suit claims, adding that she was also trafficked to other men, including a local judge who is not named in the proceedings. She alleges she was even subjected to vaginal surgery in an effort to present her as a “virgin” to one “high-profile” client – a procedure that reportedly left her “mutilated and permanently damaged.”

In addition to the threat of deportation and losing her son, Doe was repeatedly filmed nude while performing sexual acts, adding to the cache of blackmail material that Epstein and Maxwell had accumulated. She was also given a locked box to keep for Epstein – never to be opened, on pain of death – along with burner phones and other electronics to be kept similarly hidden from law enforcement and other authorities.

The duo also suggested they could get her husband a job with the FBI, describing in detail Epstein’s “influence over the FBI, the US Office of Homeland Security’s Department of Immigration and Customs Enforcement, and Florida state and local law enforcement,” in a slew of threats that ran up to May 2008 – around the same time as Epstein secured the sweetheart deal from then-US Attorney for Miami Alexander Acosta, who – inexplicably at the time, given the dozens of underage girls willing to testify that Epstein had sexually abused and/or trafficked them – let the pedophile off with a slap on the wrist.

By the time Doe escaped the clutches of Epstein and Maxwell, she claimed to be so traumatized by the threats the pair had made against her and her family – along with the potential shame that could fall upon them as devout Muslims – that she did not seek help from the authorities. Epstein had also retained a number of highly paid lawyers during this time, due to the multitude of cases against him.

Rather than face the 53-page indictment federal prosecutors had prepared against him, Epstein instead received a 13-month “sentence” that allowed him to come and go as he pleased from the jail in West Palm Beach, even seeing (and likely having sex with) more girls during his “sentence” for “soliciting an underage prostitute.”

Acosta’s excuse for the lenient treatment, reportedly delivered while he was being vetted for his position as Secretary of Labor for the Trump administration, was that Epstein “belonged to intelligence.” The convicted sex offender died in jail in 2019, while awaiting trial on further sex trafficking charges, and Maxwell herself is facing sex trafficking charges at a Brooklyn jail, her trial scheduled for July 2021.