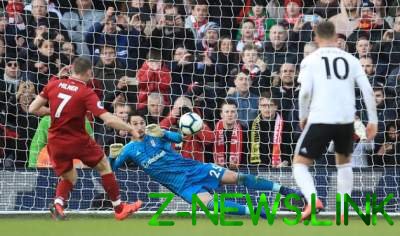 In the championship of England on football played part of the matches of the 31st round.

Liverpool almost lost points in away match with Fulham. Winning goal Liverpool only scored in the 81st minute thanks to a cool James Milner, who at the execution of the penalty was not afraid to punch the center of the goal.

Chelsea after 5:0 in Kiev in Europa League match “Dynamo” on departure were defeated by Everton FC, and distanced themselves from getting into the Champions League zone.

See also:  Shakhtar entered the top 20 ranking of the best clubs in Europe

The results of the matches of the 31st round:

See also:  Tennis in Ukrainian, Dolgopolov unable to finish the match in Hertogenbosch

The match “Tottenham” – “crystal Palace”, “Brighton” – “Cardiff”, “Wolverhampton” – “Arsenal”, “Watford”, “Southampton” and “Manchester United” – “Manchester city” was postponed due to the participation of the clubs in the 1/4 finals of the FA Cup