Epiphanius responded to the accusations Filaret 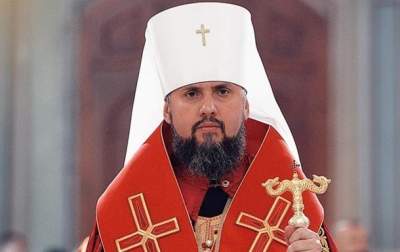 The head of the DNC calls false accusations of Patriarch Filaret of lack of independence and the intention to retire him.

So, the statement by Filaret, that Epiphanius is not independent, that they control, the head of the DNC said that it is only that he can not unilaterally make any decisions.

“I talked about the fact that I, as a Primate of their own, that is, alone can not take all the decisions. Because December 15, at the unity Cathedral, we laid a different model of leadership in the Church,” he said.

“I personally like the Primate does not have the right to change the Constitution, have no right to violate the canonical order. Because what was decided at the local Council must become a reality”, he added.

Epiphanius noted that there is a perception that may have sole control over the Church, but in ptsu, I want to be open, democratic Church, which is governed by the Synod, the bishops ‘ Council and local Council.

“In its decisions, I consider the opinion of bishops and clergy. The demands of me – that I single-handedly changed what was agreed to on December 15 at the Cathedral. However, we manage the Church collectively, we are moving away from the norms that existed in the previous structures. It is impossible to take decisions, especially when it is contrary to the Charter, the Tomos, the decision of the Council,” – said the head of the DNC.

See also:  Vice-President of the United States has equated Russia and Iran to terrorism

“Nobody has the right to interfere in our internal Affairs – neither the government nor any other local Orthodox Church, even the Ecumenical Patriarch. But to turn to him for advice or explanation of certain points about Thomas or of the Charter, we have the right,” said the Metropolitan.

“But in General, we are guided internally by the head of democratic Synod, which in the future will change by rotation. Everything as stated in the Tomos and the Charter was adopted at the unity Cathedral”, – he added.

Thus Epiphanius noted that despite the criticism in General has not ignored the honorary Patriarch, often spoke with him and talk, but you need to understand the format of communication.

“We need to understand the difference between advice and ultimatums. When dealing with an honorary Patriarch Filaret, I have repeatedly stressed this to him – I am willing to listen to his advice,” said Epiphanius, noting that it is not ready to comply with certain ultimatums, because it is a legitimately elected to the Unification Council by the Primate.

“So I listened, I talked, but this time to a certain extent even a humiliation to me as the head of the Church because of pressure and demands that are incompatible with the Charter and Tomos,” said the head of the DNC.

He also commented on accusations of Filaret that supposedly is trying to retire him.

“This is an outright lie. On the contrary, I like a Primate, protected the Patriarch Filaret. And thanks to my position, it left the city of Kiev and all what he runs now. Conducted some discussions among the bishops attending the Holy Synod, relative to its status. Namely, it is suggested that he led the parishes in the Kiev region, not of the capital,” said Epiphanius, adding that all strongly convinced that in the merit that his Holiness has made so far, he should remain the head of the eparchy of Kiev and to have respect from the new Church.

See also:  Merkel responded to the proposal for peacekeepers in the Donbass

He promised that in the future, no matter what, will do everything in his power for the sake of peace and unity ptsu.

We will remind, earlier Philaret said that he had gone “on the humiliation for the sake of Thomas,” although he was promised the leadership of the Church in Ukraine. He also insists that the UOC-Kyivan Patriarchate continues to exist.

Also he says he is fighting for the independence of the Church from the Ecumenical Patriarchate.

In addition, he accused the Metropolitan Epiphanios and the President of Petro Poroshenko to the fraud and argues that the Primate of the Orthodox Church of Ukraine somebody in charge.

Epiphanius himself acknowledged that since the formation of the Local Church there is a conflict with Patriarch Filaret, who wants to recover the UOC-KP.