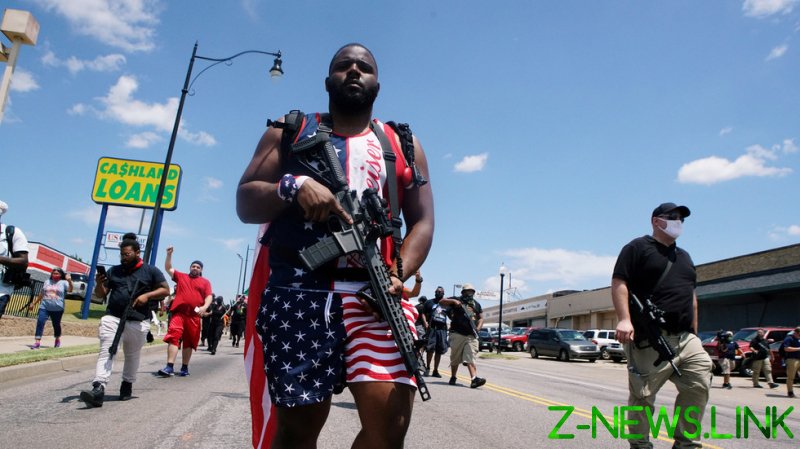 In announcing a series of “commonsense” [sic] executive measures, and the nomination of a former ATF agent turned gun-grabbing activist on Thursday, the White House said they were meant to address a “gun violence public health epidemic.” This comes after a year of unprecedented government infringement on civil rights in the name of public health in the form of coronavirus lockdowns and restrictions.

Of course, Democrat governors and public officials were exempt from those, as were people celebrating the Biden-Harris election, or rioting in the name of fighting another “public health epidemic,” racism.

Democrats have been denouncing “gun violence” in America for decades. Yet the highest number of shootings and gun deaths happen in cities under their control – and with some of the strictest gun laws, to boot. More on that in a minute.

No, you’re supposed to believe that there’s an “epidemic” of “mass shootings” over the past several months, due to the incessant and alarmist media coverage of every single incident in a country of 330-plus million people.

What goes largely unnoticed is how almost every one of those stories unravels with alarming speed once it doesn’t fit the narrative. The Atlanta “AAPI hate crime” spree turned out to be about sex, while the Boulder grocery store massacre became a “shooting” with no known motive the second the suspect was identified as a Syrian Muslim. The alleged perpetrator of Tuesday’s shootout at Fort Detrick turned out to be a Navy corpsman of Ethiopian extraction; instantly memory-holed.

When you have Congresswoman Ilhan Omar (D-Minnesota) trying to argue that the April 2 car-and-knife attack on Capitol Police by a Nation of Islam member could have been “worse if the assailant had an AR-15 instead of a knife,” you know they’re grasping for narrative straws. As Joe himself might say, “come on, man!”

Speaking of which, Biden was calling for gun control before any of these incidents happened. He literally gave a gun control speech on February 14, the anniversary of the 2018 Parkland, Florida high school shooting that killed 17 teens. While Parkland was quickly turned into another bloody shirt for gun control crusaders to wave about, an investigation into what happened quickly turned up a different culprit: an Obama administration (in which Biden was VP) policy called PROMISE, that threatened to withhold federal money from schools unless they replaced discipline with counseling, because disciplining kids would be racist.

What do you know, the Biden proposal calls for “community violence interventions” aimed at “reducing gun violence in urban communities through tools other than incarceration.” In other words, while imposing more restrictions and rules on the law-abiding citizens – punishable by fines or jail time – they have no intention of prosecuting actual gun crimes in “underprivileged” communities, because everything this White House does is supposed to be about “equity.” And black lives apparently only matter when taken by non-black killers, or something.

Just because it’s former NRA spokeswoman Dana Loesch who wrote that a “great community violence prevention program would be not to issue wrist slaps for people who kill Uber drivers or not prosecute violent rioters,” doesn’t make it any less true.

This selective enforcement isn’t based on race, though. Witness the curious case of Hunter Biden, the president’s own son, who reportedly obtained a .38 revolver by apparently lying on the background check form about his drug habits, then had the Secret Service try to retrieve it from a trash bin after it was dumped by his then-girlfriend, and late brother’s widow Hallie. As with everything else pertaining to Hunter, no charges were filed and no arrests were made, and the media remained curiously incurious.

Last, but not least, there’s Joe himself. On Thursday, even as he tried arguing that his actions won’t infringe on the Second Amendment, he said that “no amendment to the Constitution is absolute.”

At first glance a clever platitude, on further thought it’s deeply chilling. Technically it’s true, since Congress could theoretically repeal it with enough support. Trouble is, the Second is one of the founding amendments, one that made the US fundamentally different on principle to European countries from which it asserted independence, in recognizing that individual Americans are free men served by their government – not the other way around.

If you want to see where the US would be without it, you don’t need alternate history novels. Just look at Canada, which enacted a major gun grab last May by executive fiat – to thunderous applause by US Democrats, no less.

Look, here’s the deal. One doesn’t need to be a Republican, or even American, to realize that this isn’t about safety, or common sense, or “public health,” but about power – that is, securing theirs by taking the last vestiges of yours.