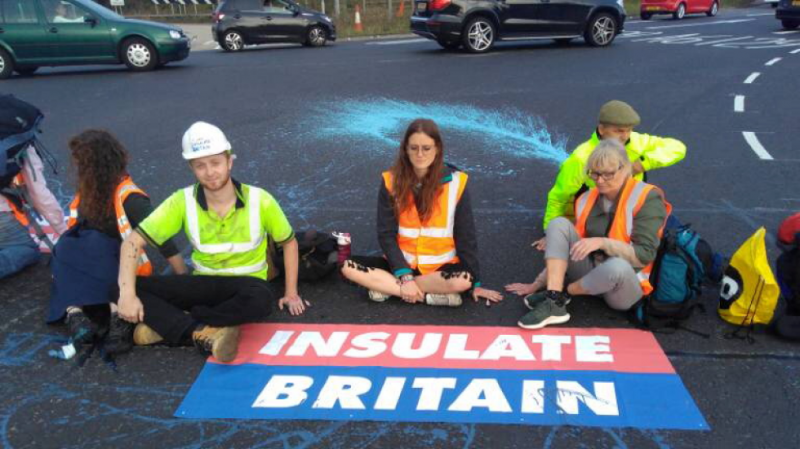 The last few weeks and months have seen a number of environmental protests aimed at causing “mass disruption” in and around London.

First it was Extinction Rebellion sitting on the streets in London aimed at putting pressure on the government to stop using fossil fuels. Then it was the turn of Insulate Britain, this time blocking, and glueing themselves to, the M25 that circles the capital and resulting in major disruption to many in the south of England.

As the name suggests, Insulate Britain wants the government to insulate all the social housing in the country, although, as it turns out, a number of those protesting have been found out for not bothering to insulate their own homes.

Unfortunately, with almost no alternative being offered by the political parties of the UK other than the zero-carbon approach, in many respects these environmental extremists appear to be pushing at an open door.

Environmental extremism is the new normal in British politics. In Scotland, it has been made even worse with the greening of the government following the pact made between the Scottish National Party and the Greens.

A key and myopic focus of this type of environmentalism is to see economic growth as deeply problematic, an approach that is already and looks further set to result in a more permanent form of austerity politics. But will environmental austerity lead to a new type of class politics?

There has been a six-fold increase in the price of wholesale gas in the last year. Seven energy firms have just gone bust. Even before this, the UK was on track to become one of the most expensive countries to power anything.

Masses of shale gas supplies have been discovered across Britain, something that David Cameron noted in 2013 meant that if we tapped into just 10% of this resource, it would provide enough gas to meet our entire needs for fifty years. But of course, this wouldn’t fit with the monomaniacal demand that we become a net zero nation by 2050.

The hysteria around fracking has prevented an entire new cheap energy supply, destroyed the possibility of many jobs in unemployment hotspots like Teesside, and ensured that the price of heating our homes will continue to escalate.

In the space of 20 years, fracking in the United States has transformed its energy production and made it the world’s largest gas producer, with gas a quarter of the price of our own, helping to boost their industrial sector. In 2000, shale gas made up only 1% of American gas production, by 2035 the revolution in production is predicted to make up almost half of the natural gas used, a truly remarkable transformation.

Meanwhile, back in the UK, the use of nuclear power continues to decline, helped by the environmentally correct suspicion of what is the cleanest of energy sources, and there appears to be few political possibilities beyond the austerity economics of the Greens.

When politicians were seen taking the knee to a 16-year-old girl shouting that the ‘End of the world is nigh’, we should have seen the writing on the wall and pushed for a more practical and balanced approach, one that didn’t impoverish the people. Instead, we find police forces taking the knee to environmental protesters who appear to have nothing but contempt for those trying to get to work, visit loved ones or even get their relatives to hospital. This softly softly approach to roads being blocked, looked, at times, like the police facilitating this disruption and on more than one occasion led to drivers attempting to take the law into their own hands.

With the UN Climate Change Conference coming to Glasgow for the first two weeks of November, it is anyone’s guess what type of protests will erupt. After all, if I were an environmental extremist at the moment, I would feel that I had been given the green light to do pretty much what I please.

Green lights of course, may soon be a thing of the past in our streets, if the Element Energy report written for the Scottish government is taken seriously. This report suggests that within ten years most of us won’t (or at least shouldn’t) be using cars. “Walking must become the preferred mode of transport for short journeys,” the report commands. Perhaps they can provide backpacks or ‘granny trolleys’ to pensioners for carrying their week’s shopping – at least the exercise might keep them warm.

The madness of this environmental extremism looks set to continue, not least of all because there appears to be no political alternative on offer to the competitive virtue signalling of carbon neutrality.

From the Conservatives to self-proclaimed Marxists, we find an anti-growth model that demoralises society and creates a sense of panic amongst the young. There appears to be little or no common sense or practical planning involved. No sense of human possibilities to resolve these problems with more science and more industrial innovations rather than less, always less.

Indeed, some of the Insulate Britain protesters argue that flying should be banned and that we should create a society, “similar to a Covid lockdown scenario”!

I once asked an environmental extremist if he would support a new mega-machine that was fitted to all the major mountains of the world and could suck the CO2 out of the atmosphere. He went red with anger and walked away.

His anger, I suspect, is because he and many like him are less interested in solving humanity’s problems than puritanically trying to limit the “scourge of mankind”.

Like the limits placed on nuclear power, these moralists are driven not by a love of the planet, but by an often-middle-class disdain for modernity and the masses – of mass flying, driving, consuming, in fact, just existing.

Environmental extremism does not and cannot represent the interests of the people because it is anti-people. The solution must come from scientific progress, an industrial revolution and a transformation in politics.