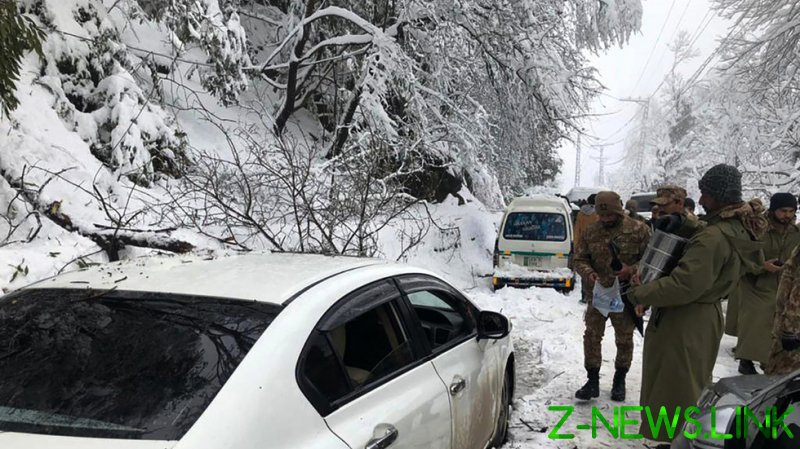 Nearly two dozen people, including families with children who were on their way to a Murree ski resort in Punjab, Pakistan, have frozen to death or suffocated in their cars after being trapped by unusually heavy snowstorm.

In the majority of cases the death was caused by hypothermia, while some of the victims may have suffered asphyxiation from car fumes, authorities said. The list of 22 victims released by rescue officials includes the names of 10 children. According to Interior Minister Sheikh Rashid, “around a thousand cars” have been stranded on the highway leading to Murree since Friday night. Military personnel, police and rescue service teams were deployed to evacuate people from their vehicles with local residents providing help to the trapped tourists.

The helicopter rescue operation, however, had to be delayed due to severe weather conditions.

Reacting to the tragedy, the country’s Prime Minister Imran Khan said that he was “shocked” and “upset,” adding that he had ordered an inquiry and put in place “strong regulation” to prevent such incidents from happening in the future.

While he primarily blamed the weather and local authorities for their failure to prevent the tragedy, the prime minister’s choice of words has evoked a wave of criticism on social media with some users calling it “shocking” and “insensitive.”

Though the tragedy shocked Pakistan, the Murree resort town, founded by the British during the colonial era, regularly sees its roads blocked due to snowfalls and the town’s popularity, with more than a million people visiting annually.