Home / policy / “Enough to endure!” The social networks are calling for a new all-Russian action in support of Khab 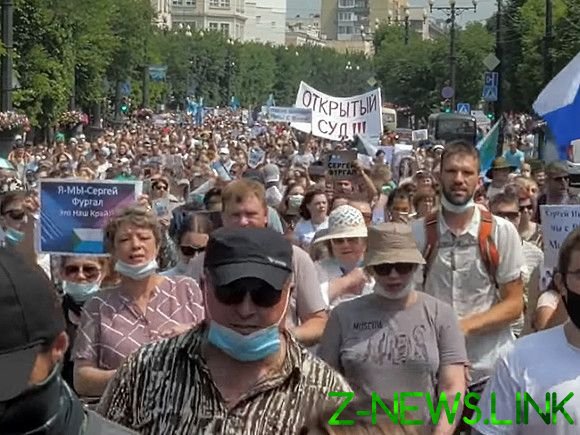 In social networks and messengers there have been reports about the new all-Russian action in support of the protests in Khabarovsk. So, video calling come to share distributed in the telegram channels. Judging by the roller, the Russians proposed 8 August at noon (local time) to take to Central squares of their cities. “Enough to endure!” — said in the video.

Earlier, similar actions took place on 1 August. In the announcement of the event, said: “Feed the pigeons and the support channel together.” Across Russia were detained at least 66 people. Most in Saint-Petersburg — 22, in Moscow have detained 14 people. August 3 “MBH media” wrote that the activist of Viktor Bondarenko, who was detained for similar actions in Moscow has fined on 150 thousand roubles, having found him guilty of a second violation of the rules of the meetings (part 8 of article 20.2 of the administrative code).

In Khabarovsk, daily from July 11, are large-scale spontaneous rallies and marches. People are unhappy with the arrest of the former head of the region Sergey Furgala, who is suspected of murder 15 years ago. Vladimir Putin dismissed Furgala with the phrase “in connection with loss of trust”, appointed acting head of the region, his fellow party member Mikhail Degtyarev. However, the festival is also not much. The degree of discontent grew after Degtyarev said that the organization of the meetings involved some foreign nationals who are “rocking” the situation in the region.